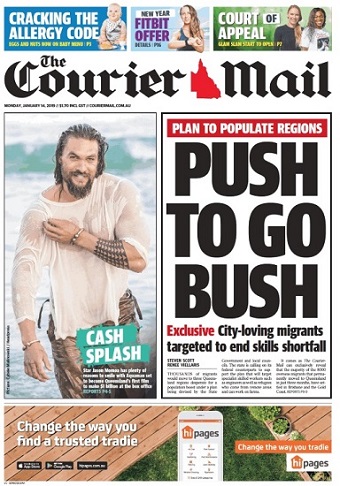 Brisbane’s Murdoch-owned tabloid The Courier-Mail has shown that those in the communication business aren’t always the best at communicating,  as The Bug’s Wayne Kerr reports.

Check out the front page of Monday’s edition of The Courier-Mail (main picture above) with a headline screaming about those who come from interstate or from across the seas that girt our land to share in our boundless plains – you know, the ones that abound in nature’s gifts of beauty rich and rare.

The front page contained a short pointer to two stories on population and migration issues spread across pages eight and nine (pictured).

One of them, written by the paper’s federal political editor Renee Viellaris, detailed what parts of Queensland new arrivals head for when they get here.

Her story was based on statistics given “exclusively” to The Courier-Mail and mentioned a population strategy being developed by Prime Minister Scott Morrison.

The link between the “exclusive” provision of the stats, the purpose of encouraging a story on population and migration in the wake of public debate over pressures on infrastructure and services let alone refugees, plus the PM’s political strategy for the expected May election is a whole other story, so let’s not go there.

But let’s note the second story on pages eight and nine – the one about the Queensland Government’s own plans to work with local councils to send new arrivals to regional areas.

The story by the paper’s federal political reporter Steven Scott listed some of the bush towns where migrants and even refugees would be directed to toil with hearts and hands.

The take-away info from both stories is that – for whatever reasons –  both levels of government seem to be seeking to ease pressure on metro areas by boosting regional centres and therefore regional economies.

All well and good. Message received.

It’s a report on a Courier-Mail investigation revealing the higher costs faced by those living in regional communities across Queensland compared with their metro cousins for basics like food and groceries (pictured). 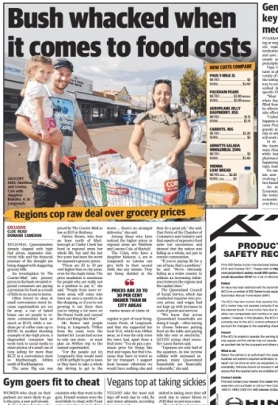 The paper’s research showed anything from carrots, milk, bread, biscuits, canned tuna, and bottled instant coffee are consistently dearer than in metropolitan stores. Even a packet of one of our national icons, Aeroplane Jelly, costs $1.00 more than in the big smoke.

It’s a worthy story that the reporters who complied it must have worked on for some little time.

It’s also a story that somewhat undercuts the stories on pages one, eight and nine.

Yet the story that shows a downside to the “send them to the regions” stories runs isolated from the others by five pages.

Surely someone at The Courier-Mail might have thought they were linked and should run together?

Apparently not. Or, if they did, they didn’t communicate their thought effectively enough.