Eyewitnesses continue to come forward with their own accounts of exactly how brave former Prime Minister John Howard was in defusing a potentially deadly domestic spat on a leafy North Shore, Sydney, street recently.

Despite his 80th birthday and his Wollstonecraft home being both just around the corner, Mr Howard interrupted his morning walk looking for both to step between and separate the scuffling couple.

Local gay man Flynn Davit (pictured) told The Bug: “I think it’s the bravest thing I’ve ever seen in my life. I just wish that wonderful Tony Abbott was still our nation’s leader so he could immediately bestow an Australian knighthood on Mr Howard. ”

Mr David’s long-term partner Henny Geraldson said: “We were just out walking Francis [the couple’s pink French poodle] when we heard a woman shout ‘Don’t stay away from me!’.

“We looked up and recognised Mr Howard straight away from his green and gold tracksuit and the way he was pretending to wave to people he passed even though there wasn’t anyone else around except for us two old queens and some butch dykes across the road.

“He didn’t even hesitate before shuffling over, taking the distraught woman in his arms and then turning his back to the other man to protect her. It was just a magnificent and instinctive thing he did. It’s our nation’s sad loss that he’s no longer our leader.

“He really is a Sydney institute … I mean, institution.”

A lesbian couple on  the other side of the street also witnessed Mr Howard’s brave intervention.

“We just happened to be out on the street walking Anthrax [the couple’s male pit bull terrier] when we heard the couple arguing,” said Pia Sackerman,  who praised Mr Howard for not being conned by the other man’s “pathetic attempts to deflect blame for the domestic violence onto his female partner”.

“He was cowering and covering his head and saying ‘thank you…thank you’ over and over and I heard Mr Howard yell: ‘Aaa… aah…nah….ahhh…eer…. I’ll decide who I’m going to rescue here and the manner in which I rescue them!’

“I can only guess what that arsehole has done to his partner because she was struggling to free herself from Mr Howard’s grasp to have a go at him, shouting: ‘I’ll kill you …. I’ll kill you’ over and over again.” 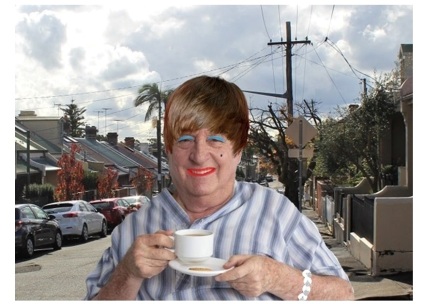 Pia’s long-term partner Alana-Jo Ness (pictured) said the distraught woman was lucky to have been rescued.

“By the time Mr Howard got to her, his ankle rope back to his Wollstonecraft home had almost reached its limit.”