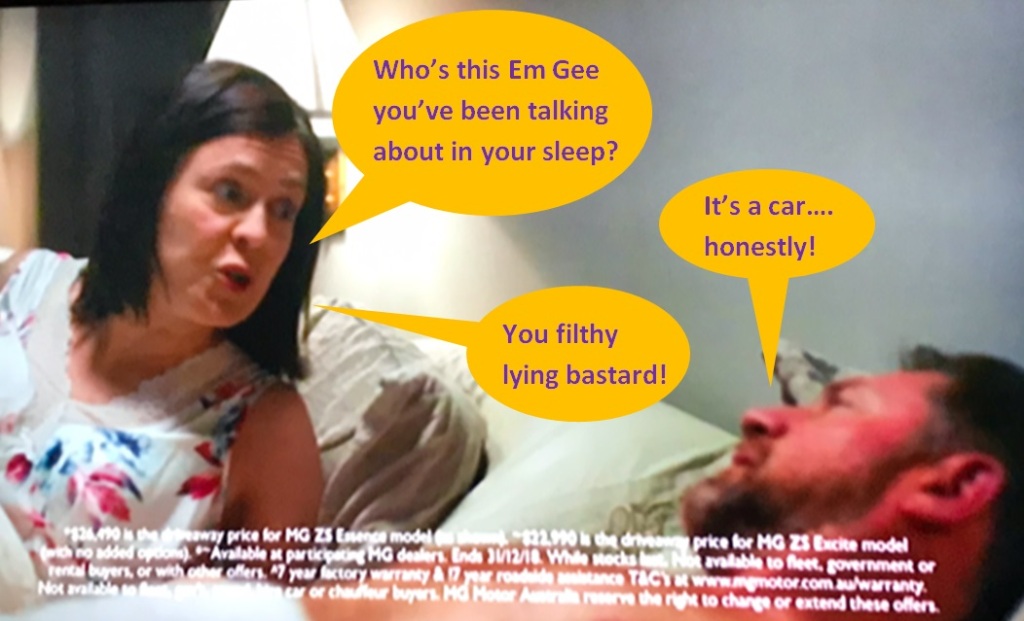 Seen that TV ad where this poor schmuck is being given a hard time by his missus in bed? I know. I know. It should be the other way around, right!

Wrong! This is, after all, the 21st Century. So she’s banging on about trust. He’s done something badly wrong. That’s your thinking, ladies? #metoo.

Been playing up like a two-bob watch would be a safe bet. Shithouse lover? That’s on the cards too. Passed on some dreadful disease? But no! He’s been bragging about buying a new MG ZS Excite sedan for under $23,000 on the road. 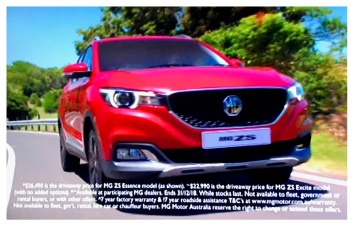 I’m with you, ladies! They haven’t made an MG for years! And even if they did, imagine any man in the 21stC going out and buying a new car without seeking input from the missus? Can you? #ican’t

What the hell would have been wrong anyway with a new KIA or Hyundai? Bet they’d keep their value much better too.

Anyway, the poor prick is probably staying on a mate’s couch now, especially if he was also upfront about how things went down at the MG sales room………

Schmuck: So I’ve seen your new ZS Excite four-door sedan advertised on the TV for only $22,990?

Salesman: That’s exactly right  sir. And here it is. A little beauty, isn’t it!

Schmuck: It does look nice. Let me just walk around it so I look like I know what I’m doing here ….hey, the engine bay is empty!

Salesman: We leave the engine out, sir, because buyers invariably opt for a higher-performance petrol or diesel engine.

Schmuck: No, the standard engine will be fine.

Salesman: It will be fitted straight away then, sir, if they still make such a basic engine. No-one’s ever wanted the basic two-stroke 33cc motor before. Especially if they want to drive uphill.

Schmuck:  Uphill! Of course I want to be able to drive uphill. Downhill as well.

Salesman: If you plan to drive downhill, then I would recommend the disc brakes all round.

Schmuck: They’re only drum on the base model?

Salesman: Sadly no. They’re not.

Schmuck: I appreciate air-conditioning is an option but what will that cost?

Salesman: Well, you will need doors and windows to keep the cold air in, sir.

Salesman: Would you like I see some paint charts now?

Schmuck: Could you please just tell what this bloody car is going to cost me to drive safely out of this showroom?

Schmuck: I can’t tell the missus that. She’ll kill me!

Salesman: Well, she’s going to kill you anyway when she finds out this special deal expired on December 31 last year. It pays to always check the fine print, sir.

MG Australia spokesperson, Morris Garages, could not give The Bug the company’s projected sales targets for the new model over the coming calendar year, citing them as commercial-in-confidence.

“We are not expecting to sell a single unit of the base Excite model,” he did admit. “Do you want us to go broke?”