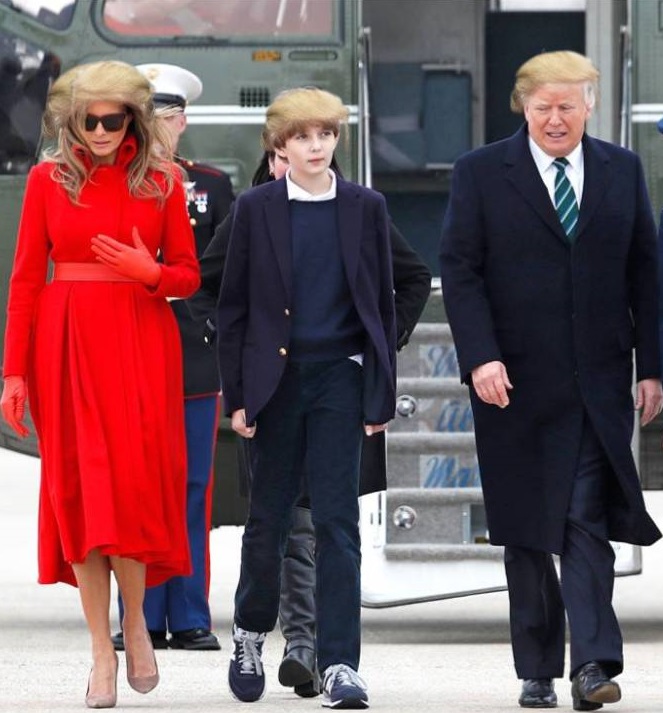 US President Donald Trump says he is taking a new “proactive approach” to mass shootings in the USA.

Mr Trump made the announcement to reporters before boarding Air Force One for a trip to console the families of victims of America’s latest mass shooting which has yet to occur. He was accompanied by a woman resembling his wife Melania and their son Barron.

“While we don’t know where that shooting is going to be, I know it won’t be long before it happens,” the President said. “So I have decided to be proactive about these tragic events and from now on I’ll be spending as much time as possible cruising around the skies in Air Force One so I can fly quickly to affected communities.

“I know this new policy will keep me away from the White House a lot, but Vice President Pence, my White House chief of staff, other senior administration staff and even the Secretary of State all said to me: “Go, sir. For God’s sake, go. We’ll hold the fort the best we can. Your job as this nation’s stable genius healer is to be there to console those whose lives are shattered by such senseless shootings, and to bring together a fractured American community as only you can.”

And the president promised his response would indeed be prompt and very presidential.
“The best presidential ever by far, okay. Easily the best,” Mr Trump said.

“I’m told Air Force One can be refuelled in mid-air so it can fly indefinitely if it needs to. That means I’ll be able to stay airborne and drop in to any of the many, many communities who’ll experience a mass shooting in the future for sure.

“I’ll be up there at 30,000 feet ready to give the order to Air Force One’s pilots to gun it and make for the latest shooting site.

“I’ve directed my pilots to do circling loops targeting states in the union with the highest rates of gun ownership and mental illness among its residents.”

Before climbing the stairs of his aircraft, Mr Trump asked reporters to observe a moment’s silence in honour of the as yet unknown mass shooting victims and their community.

“My thoughts and prayers are with the victims of the USA’s latest mass shooting and their families and loved ones whoever, whenever, and wherever they are,” he said.

“And I fully endorse any statement that the National Rifle Association will no doubt release when this next mass shooting occurs, pointing out that the death toll at the music event, pre-primary school, town mall, church service, sports stadium or whereever could easily have been avoided if there had been more armed guards and snipers present and as many of those music lovers, school kids, shoppers, worshippers, sports stars and their fans or whoever as possible had been carrying very high-powered automatic assault weapons,” the president said before climbing the stairs to his aircraft, a large black umbrella stuck to the sole of one of his shoes and a sheet of toilet paper trailing from his orange comb-back.