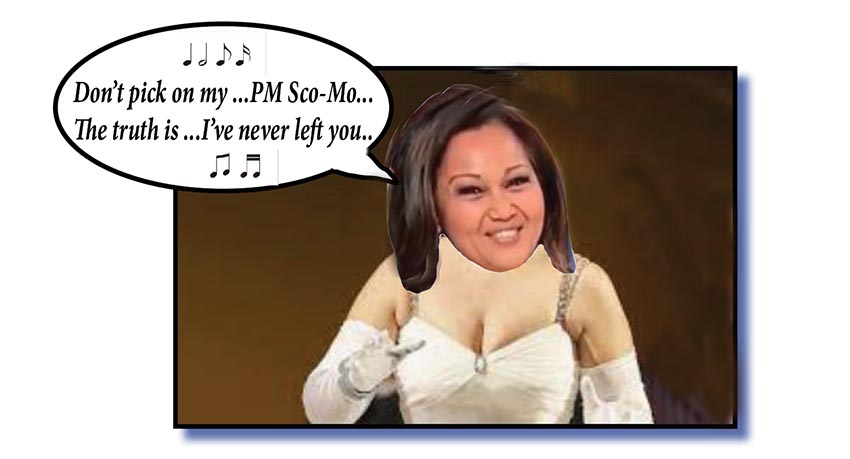 A sensational demo tape has secured ABC Weekend News presenter Fauziah Ibrahim a much-deserved invitation to join the Mainstream Media Political Choir. Fauziah is the youngest journalist ever invited to join the choir and The Bug sat down with the excited young woman just before her first rehearsals at a community hall in Glebe, Sydney.

The Bug: We’ve seen the tape and you’ve put a great song together for your audition for the choir. You’ve got a great set of lungs there, by the way.

The Bug: It’s a lovely song based on Don’t Cry For Me, Argentina. What inspired that?

Ibrahim: Well, I was getting stuck into new Albanese minister Stephen Jones the other day and roused at him for playing the blame game and demanded he just get on with things, for heaven’s sake.

The Bug: Well, they have been in power for four months. Inflation’s been terrible under their watch. And they’ve broken their election promise to reduce power bills by $275.

Ibrahim: Exactly! You guys aren’t too bad, are you? I’m sorry but I was a bit reluctant to talk to you. I thought you might have been urban woke Labor trolls/thugs and lobotomised shitheads.

The Bug: No worries. That mistake’s sometimes made.

Ibrahim: Yes, I went away from that interview thinking how unfair it would be for Labor to harp on and on about the past nine year of LNP government. They did a good job and never wasted time complaining about the dreadful Rudd/Gillard/Rudd years. Jones was playing such cheap and nasty politics that really should have no place in modern political discourse. So I thought up a song title Stop Playing The Blame Game, Labor. Madonna’s song came to mind and I took it from there.

The Bug: And we’re told the joint choirmasters of the Mainstream Media Politics Choir Phillip Coorey and Chris Uhlmann were both very impressed with your application tape?

Ibrahim: They were. I think everyone on the choir now realise their performances during the election left a lot to be desired. The sad outcome is, I guess, proof of that.

The Bug: There were some rather stale songs there. It’s Better The Devil You Know and Only The LNP Can Provide Strong Economic Management had lost a bit of their impact?

Ibrahim: That’s right. Phillip and Chris came up with a fresh one, A Hung Parliament is Inevitable.

The Bug: It was a toe-tapper, to be fair.

The Bug: Albo’s First-Day Gaffe Just Cost Him The Election?

Ibrahim: Yes, that one gave me goosebumps hearing the choir belt that one out in full voice during the campaign. The lead duet by Phillip and Chris still makes me teary. Very catchy I thought but for some reason it just didn’t resonate with our audience either. It should have seeing how hopeless Albanese was during the campaign. And the disappointment he’s now proving as PM.

The Bug: Indeed. Apart from your wonderful new song, any other fresh material expected out of the Mainstream Media Politics Choir for the years ahead?

Ibrahim: Peter van Onselen is working on a nice piece…

The Bug: Which of the three Peter van Onselens?

Ibrahim: The one who’s a politics professor at the University of Western Australia.

The Bug: What’s the song?

Ibrahim: Time Is On Peter Dutton’s Side.

The Bug: Clearly, the choir’s repertoire could do with some humour?

Ibrahim: I think so. We’ve all got some very sad times ahead of us.

Below: Library footage of the Mainstream Media Choir in full voice in happier times.