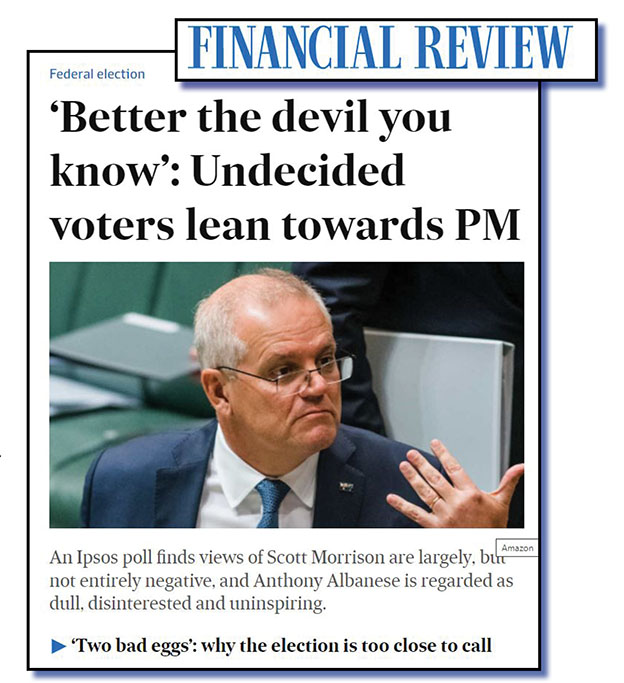 Should a poll just conducted by Ipsos and reported in today’s Australian Financial Review be nominated for the Booker prize for Australian fiction?

Talking to focus groups, Ipsos has declared that undecided voters are leaning towards Prime Minister Scott Morrison and the 21 May election is now suddenly a close-run thing.

Well, that’s how Phillip “I was born believing the Liberals are better economic managers” Coorey is reporting on the poll this morning and it begs the question: did Phil have any input into the focus groups selected and the questions they were asked?

Here’s the problem as The Bug sees it.

We are, after all, talking about a newspaper helmed by Michael “Is that Genghis Khan I can see way over there on my left flank?” Stutchbury.

A week and a half ago, the first major poll of the election by Ipsos for the Fin. Review had Labor leading 55-45 on 2PP terms. It was taken from Wednesday March 30 to Sunday, April 3.

Of all the major pollsters who reported after the Budget was brought down, Ipsos had the LNP’s primary vote the lowest on a pathetic 31 per cent – that’s a whopping 11 per cent below the primary votes the Coalition managed back in 2019.

On those figures, if Smoko were a child at a sideshow knock ’em downs where every child player wins a prize, he would go away empty handed.

It was also the biggest poll, with 2584 people surveyed.

The poll had Anthony Albanese ahead 38-37 as preferred PM. Albanese had an approval rating of -2; Morrison’s was -15.

Can you see why The Bug is suspicious of this “focus group” poll and the way questions to those groups were maybe framed?

The Bug accepts that general polling and focus group polling of undecided voters are different; if their findings appear to be at odds doesn’t mean they’re wrong.

But how Ipsos can now declare the 21 May poll is going to be close on the results of the focus group data beggars belief. What percentage of undecided voters would have to swing to the LNP to make a whopping 55-45 lead suddenly close? They would have to do more than just lean; they’d have to fall flat on their faces into Smoko’s lap. Ipsos facto?

As the deadline approaches to upload this report, we’re still trying to find out details of the Ipsos survey for the AFR, when it was taken, etc, etc, without having to pay for a copy of the right-wing paper. We’d rather die in a ditch than fork out coin for that crap. And our local library isn’t open yet. We’ll update this post later if we can.

But we can glean one thing from the way the Fin. Review writes of it. Apparently, respondents have found Albanese to be “dull, disinterested and uninspiring”.

If nothing us, the poll tells us the folk in these focus groups don’t have a fucking clue what “disinterested” has ever meant, once or now.