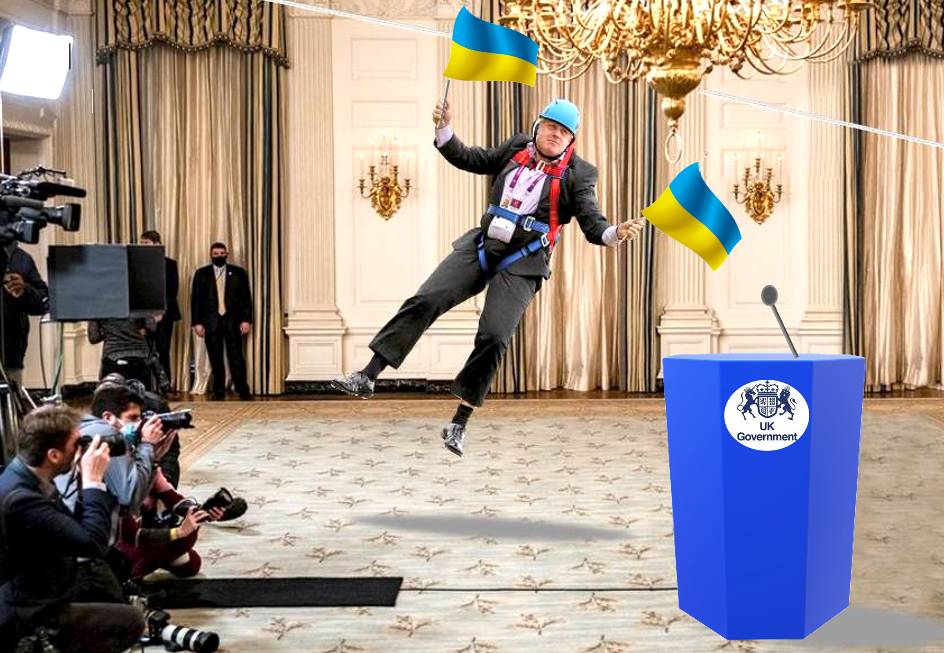 After arriving by zipline to a news conference at 10 Downing Street (main picture), Mr Johnson asked media representatives to stand while he sang Ukraine’s national anthem.

The Prime Minister then spent 11 minutes loudly singing in a mock Russian accent and in an anthemic style what reporters present believed to be This Wheel’s On Fire, the theme song from the 1990s UK TV sitcom Absolutely Fabulous.

Mr Johnson then addressed the Ukrainian situation and repeated his claims that the UK “must do everything we can” to help “the brave Ukrainian people” repel the Russians.

He also repeated his assertion that the forces let loose by Russian leader Vladimir Putin were committing war crimes for which Putin was responsible.

But questioned about the UK imposing a no-fly zone over Ukraine, Mr Johnson said such action was not contemplated.

“Steady on old chap. Or chapette, as the case may be in these gender fluid times. Hey what!” he said to the reporter who asked the question.

“Both NATO and the European Union have ruled out imposing a no-fly zone.”

Reporters then barraged the PM with questions reminding him that largely because of his own efforts, the UK was now not a member of the EU and could also act independently of the NATO agreement if it desired.

Mr Johnson responded by asking for a moment’s silence to remember the Ukrainian civilians and members of its military who had died so far in the conflict.

He added that all in the briefing room should bow their heads out of respect to the dead and close their eyes to offer their silent prayers.

Reporters complied with the PM’s request but once they ended their prayers and opened their eyes Mr Johnson had departed the room.