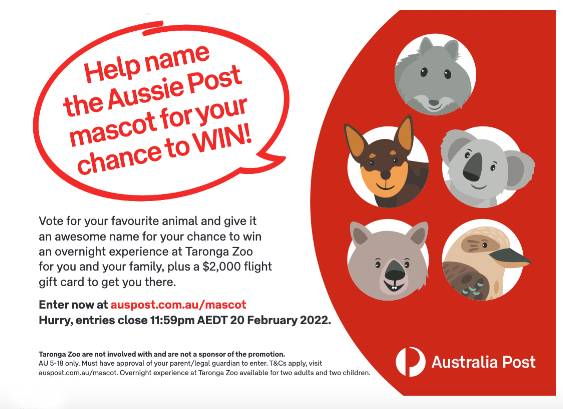 Australia Post says it has been deluged with responses to its latest promotional campaign to name a shortlist of animal characters as its new corporate mascot.

The taxpayer-owned mail and parcel distribution service has been running a national advertising campaign to encourage Australians to choose and name a mascot from among a selection of suggested native animals. (main picture)

An Australia Post spokesperson said there had been a strong response to the new campaign.

The top five nominations so far (pictured top to bottom at left) were:

“There’s a great prize on offer – an overnight family stay at Taronga Park Zoo in Sydney plus $2,000 voucher for air fares to get there and back,” she said.

“The winner will be advised by mail, so I’d recommend that anyone who’s entered should stand by their letter box, possibly for some months, and maybe even keep an eye on your neighbour’s letterbox or even your neighbours’ letterboxes just in case.”