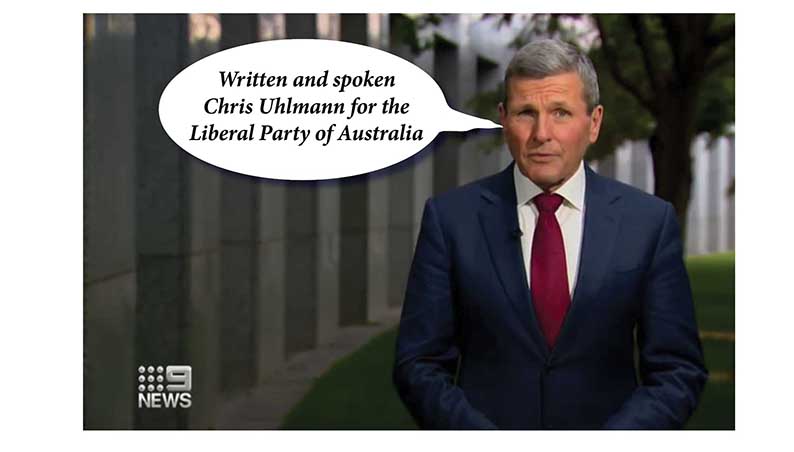 Channel 9’s Chris Uhlmann continues to present national political reports that interested observers could reasonably suspect offend some basic rule that should require the station to add “Written and spoken Chris Uhlmann for the Liberal Party of Australia” at the end.

His dissection on last night’s news of the latest Newspoll results is a case in point, where he said: “Six months out from the last date on which a federal election can be held, the latest Newspoll has Labor just shading the Coalition on primary votes.”

Now, what he says is not wrong in itself. It’s true that the government gained two primary points in the last poll to move to 37 per cent to Labor’s 38 and that might have Uhlmann pressing down hard to suppress a chubby excited by such news.

But as if to support newsreader Melissa Downes’s lead-in comments that the poll “points to another close election”, Uhlmann appears to have purposefully ignored the poll’s two-party result of 53-47 to Labor, a slight narrowing of the margin from eight points to six but still in landslide territory for Albanese and Labor.

Let’s all remember that the government’s 37 per cent is made up of two coalition parties. Well, more, if you want to be pedantic.

To get excited about Labor only shading the government totally ignores that there are two main centre-left parties and that the 11 per cent (unchanged) Greens garnered in the latest poll is what helps create that big 2PP gap that has been the case for quite some Newspolls now.

To be fair to Uhlmann, as we always are at The Bug, he did report that Albanese had narrowed the gap as preferred PM.

But does anyone out there in Bugland doubt that Uhlmann’s job – and sadly that of many others in the MSM – is and will be over coming months to create as level a playing field as possible before and during the campaign proper? Their definition of a level playing field is to do their best to whittle away any poll lead Labor might hold up to when the starting gun is fired on the 2022 poll.

Their goal will have nothing to do with fairness and balance or good journalism; it will be to drag Labor down. Their “level playing field” is a campaign where Labor is well and truly outspent in advertising – monstrously so if the Fat Man throws around $90million plus again – and where not just Newscorpse but other media as well run disgraceful, non-stop, pro-LNP propaganda.

And a memo to the Channel 9’s graphics department: your primary vote graphic (above) was total crap, which at least makes it consistent with Uhlmann’s view of things.

If the aim of the graphic was to compare recent Newspolls, the LNP’s stats are right; it shows the 2 percent rise in their primary vote from three weeks ago.

Which means Labor’s vote graphic should show steady or zero, not plus 4 percent which more or less gets the party’s increase since the 2019 election right. If 9News wanted to go down that path, the LNP should be showing minus 4.

Made the mistake the other morning of listening to one of those podcasty thingos between Fran Kelly and Patricia “Ooh, wah, you just swore on national television” Karvelas.

Fran had no doubts whatsoever. The federal election next year would be fought on the economy.

The jobless rate then would be 4 per cent.

Any errors in the vaccine rollout would be long forgotten.

Spoken Fran Kelly for the Liberal Party of Australia.

For mine, Fran can’t switch off her microphone soon enough. And keep it switched off.

They’d never admit it but the likes of Kelly, Uhlmann, Phillip Coorey over at The Australian Financial Review, Rob Harris (and sadly too many others at the Nine mastheads) and basically the whole gang over at Newscorpse desperately want Morrison to be re-elected and they’ll do whatever they can to achieve that end.

They know the best chance for that to happen is an election fought, not on how rottenly corrupt and useless Morrison and his mob have been, not on a nonsense and ineffectual climate change policy, not on gold-standard rorts, not on stuffed-up vaccine rollouts, not on ministerial missteps and a litany of lies, but on the one issue – that the LNP are supposedly better managers of national economies.

It’s complete rubbish, of course, and there’s not a skerrick of evidence to support the proposition, but polls do show a majority of Australians still think that’s the case (they’re told it often enough) although the gap is narrowing.