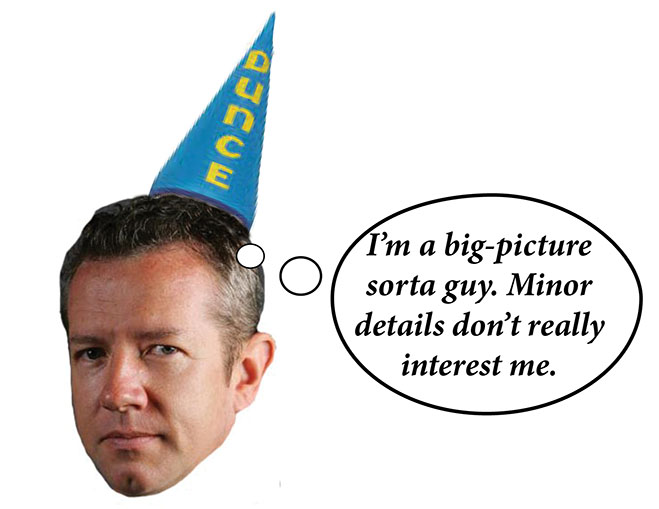 If Peter Hartcher is among the crème de la crème of this nation’s mainstream media politics scribes, just imagine how bloody awful some of the others are.

Well, consider this. I reckon most journos around Oz with even a modicum of interest in politics would know that Scott Morrison’s infamous “I don’t hold a hose, mate, and I don’t sit in the control room” was made from Hawaii after he was sprung there holidaying with Jen and the girls.

They might be fuzzy on the details so let’s refresh everyone’s memory: Smoko made that comment in a radio interview – from Hawaii – to 2GB on December 19 in 2019.

Just like the Prime Minister’s Office lied about his whereabouts, Smoko lied on that interview, saying “I’ll be getting back there as soon as I can” before fuming, arms crossed and fists clenched, for a few days like a naughty boy refusing to put his scattered toys away.

He also lied when he announced: “[Australians] will be pleased I’m coming back, I’m sure”.

So what’s Hartcher’s memory of when Smoko used this “immortal” phrase? Here it is. from his column in Saturday’s The Sydney Morning Herald.

BEFORE LEAVING IN SECRET TO HOLIDAY IN HAWAII!

A cadet – remember those? – in their very first week on the job would have it drummed into them: get the basic facts right! Or no-one will take you seriously.

The very thought that Hartcher might be among the crème de la crème of politics scribes sure leaves a sour taste in this one-eyed ranter’s mouth.

PS: Because The Bug and its writers are ALWAYS very, very fair, we accept that maybe the one sub left at the SMH fucked up Hartcher’s copy. If so, our apologies up front to Peter. Pete. Mate!