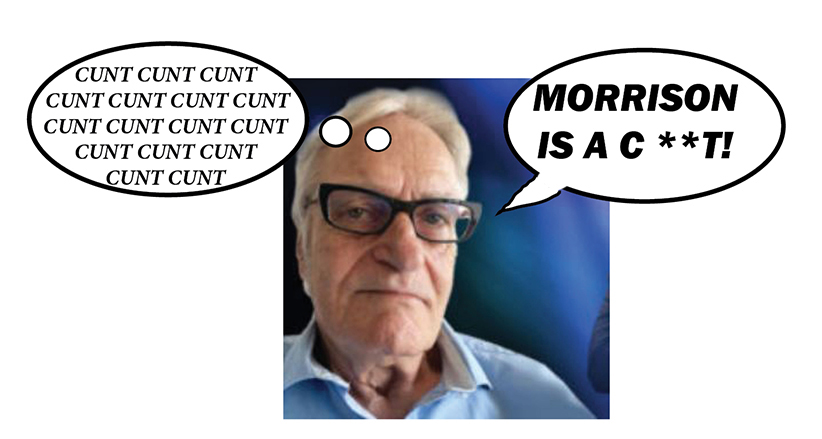 Does anyone out there in Bugland want to take a guess as to how many children read The New Daily?

We at the MGH reckon not many at all. So what’s with the prudish nature of this news organisation. And, if they think something is SHIT, why can’t they call it for what it is?

And even if kids do read The New Daily, SO FUCKING WHAT!

As you can see from the graphic above, columnist Dennis Atkins in today’s online edition bluntly suggests that as a nation battling the coronavirus, we’ve “collectively lost our s**t.

To be fair, as the MGH always is, Dennis, the fine political analyst that he is, might have used “shit” when submitting his column. He might also have used “bullshitting” in the middle of the column.

So maybe some sub-editor or upload nerd at The New Daily has censored the piece to suit current Australian standards of decorum and moral behaviour?

Whoever it was, can we just point out that if some kids do read The New Daily, there’s a fucking good chance last night that they spent time in front of the tele during which “shit”, “cunt”, “bugger”, “arsehole”, “poo”, “fart” and “scott morrison” flowed freely from the set. Or from their parents’ lips.

So, please! If all of you at The New Daily want to give a shit … then give a SHIT!

To fill out this edition of the MGH, we scoured today’s Saturday edition of The Sydney Morning Herald, usually a rich source of journalistic and production blunders and bloopers.

But apart from a few usual literals of no great importance, we came up empty-handed. There wasn’t even a Parnell Palme McGuinness essay to have a giggle over.

We’ve retired to our trailer and we’re having a Bex and a good lie down.

Our MGH teams scoured today’s Weekend Australian looking for a story that ripped shreds of the Morrison Government for trying to pull the wool over the eyes of readers about the “game-changing” deal on Pfizer vaccine supplies reported in Friday’s edition of The Australian. (pictured)

You might recall Friday’s front-page lead in The Oz which was an “exclusive” – what else? – about the deal PM Scott Morison and Health Minister Greg Hunt had negotiated and the “extra doses” it would deliver that would  “triple [Australia’s] access” to the Pfizer vaccine.

It was reported as a “dramatic acceleration” of the vaccine program that clearly involved “additional doses”.

Well, as it turns out it was merely bringing forward supplies already in the pipeline.

We will wait for The Oz to run a story revealing how livid it must be at being misled into reporting the deal as something far bigger than it was, and that helped soften criticism of the Morrison Government’s bungling of the entire vaccination program.

Our MGH teams are settling in for a long wait. A very, very long wait.