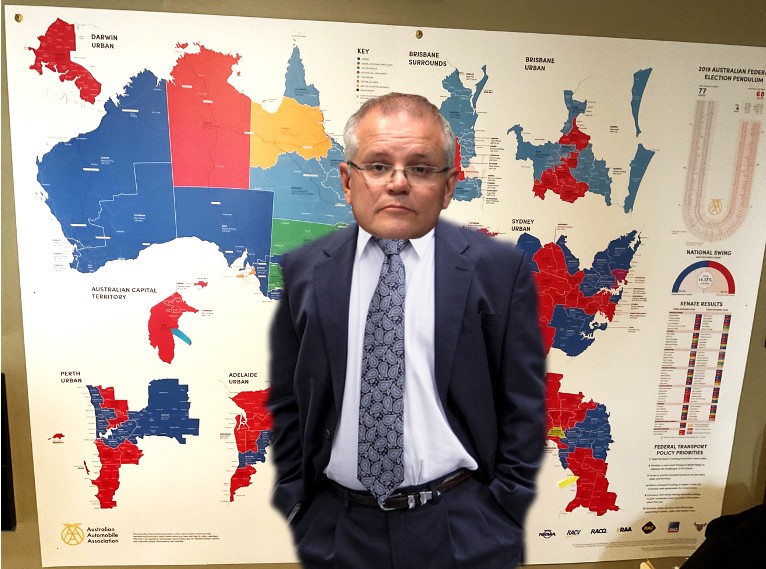 CANBERRA: Prime Minister Scott Morrison has angrily dismissed media and opposition suggestions that the government’s decision overnight to name a number of marginal seats around the nation as designated COVID-19 lockdown “hot spots” was done for purely selfish political advantage.

“I don’t accept the premise of your question,” a snarly PM responded to one member of the Canberra media pack who claimed to have seen a colour-coded spreadsheet of 14 marginal seats sitting close to and on either side of the 2019 election outcome pendulum that are now eligible for federal government financial assistance if COVID-19 flares again in those electorates.

The scribe said seven marginal government seats – Bass and Braddon in Tasmania, Wentworth and Reid in NSW, Chisholm in Victoria, Boothby in SA and Swan in WA – had been coloured in various shades of light blue; with the ALP’s seven most marginal seats were similarly shaded in light reds and pinks depending on their two-party preferred margins.

“I haven’t seen this spreadsheet and will not see it until, maybe, early 2023 but so what if it exists?” Mr Morrison shouted as he waited for a Chris Uhlmann dorothy-dixer to end the media call on.

“What do you expect marginal Coalition seats to be coloured? Purple? Orange?”

Mr Morrison said the important message was that his government had “stepped up to the plate to ensure there will be no shutdown of my government come the next federal election”.

“The financial assistance to those struggling in all these potential hot spots will be in the form of $500 gift vouchers that can be redeemed weekly at Harvey Norman outlets across those electorates.

“So you can expect shortly to see LNP sitting members and candidates being pictured handing out the large novelty gift certificates with their names and faces splashed all over them.

“This represents a sizeable financial commitment by the Commonwealth and we naturally enough are very happy the money is going to those who need it most. And of course by that I mean Gerry Harvey.

“In fact it’s such a good scheme, brilliantly targeted, that we might even spend some of the money promised if not allocated for it, unlike the billions we never delivered to help bushfire and flood victims recover and rebuild over recent times.”