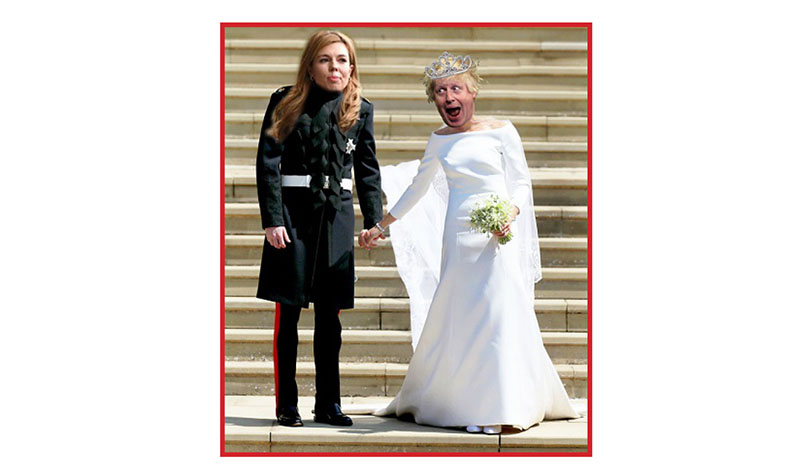 UK Prime Minister Boris Johnson and his live-in partner Carrie Symonds have married in a low-key ceremony in London.

Although media representatives were excluded from the cathedral, it is understood the ceremony did not go off without a few hitches.

Wedding guests who did not wish to be identified told The Bug that Ms Symonds had written her own deeply personal vows and recited them in a moving and passionate manner, bringing a tear to the eye of many guests.

When Ms Symonds finished, the celebrant,  Father Daniel Humphreys, turned and looked expectantly at Mr Johnson who stared back for some moments.

“Boris looked flustered and ruffled his already ruffled hair,” said one guest. “It then dawned on him that perhaps he was expected to react to the vows.

“So he exclaimed: ‘What-oh chaps, and chapettes. Those vows! What a wheeze, hey?’

“Fr Humphreys then whispered into the PM’s ear, obviously alerting him to the need to recite his own vows.

“Boris again looked flustered and again ruffled his already ruffled hair. It was clear that he had totally forgotten to write any vows.

“He then patted his pockets, obviously hoping that someone from his Downing Street office had written and provided some for him.

“But they hadn’t. So once again he looked flustered and ruffled his hair yet again.

“Boris looked around for a Downing Street staffer and called one over who handed him a piece of paper which those of us close enough could see was actually some official government talking points on the COVID-19 pandemic.

“Boris read the first three lines in schoolboy French, explaining to the guests that it was a special haiku he had penned just for the occasion.

“She just looked at him and said loudly: ‘Of course everyone should get vaccinated.’

“She then fled in tears to the vestry where she locked herself in for the best part of half-an-hour before Boris managed to talk her into joining him for photos outside.

“He explained to her that he had actually already posed for some photos outside on the steps of the cathedral but that the media photographers had asked if his wife could join him too.

“So, all in all, the day went off just as most guests thought it might,” the anonymous guest said.