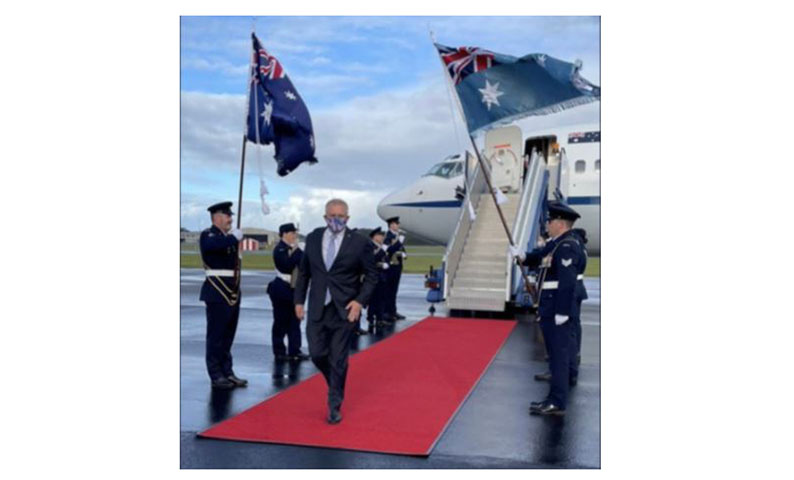 An unforgiveable diplomatic blunder has left a fuming Australian Prime Minister Scott Morrison stranded aboard his RAAF jet at Queenstown Airport and his red-faced Kiwi counterpart promising quick action against those responsible for the cross-Tasman snafu.

NZ Prime Minister Jacinda Ardern was quick to issue a full and unconditional apology to Mr Morrison while expressing hope that “the strong bonds of ANZAC mateship going back more than a century will put this terrible slight into some perspective”.

Ms Ardern was referring to the fact that the Royal New Zealand Air Force had neglected to roll out the red carpet for Mr Morrison’s arrival for their annual leaders’ talks in the South Island tourist hotspot.

The Australian PM spotted the carpet’s absence as soon as his jet came to a stop, refusing to leave his seat and angrily telling aides: “I don’t handle bare tarmac, mate.”

A highly embarrassed Ms Ardern also spotted the error almost immediately, ordering NZ police to contact the owner of a local Carpet Call franchise to demand he open his store on the Sabbath and provide 20 metres of red carpet to allow Mr Morrison to finally step down from his jet, once he had heard Ms Ardern’s unconditional apology translated into English.

At Australian airports that Mr Morrison flies into, RAAF personnel always roll out the red carpet and provide a suitable guard of honour (at top).

The Bug understands that the crisis arose in Queenstown because his RAAF crew had not taken a red carpet and guard of honour across the dutch with them, assuming the RNZAF would do the honours on their home soil.

Unfortunately, New Zealand does not have an air force any more after its F-111 jet was retired from service eleven years ago.

“But that’s no excuse, really,” one of Mr Morrison’s aides said.

“Local authorities here should have known what to do. It’s all about showing respect to the Father of our Nation and the best national leader Australian blue-collar workers have ever had.”