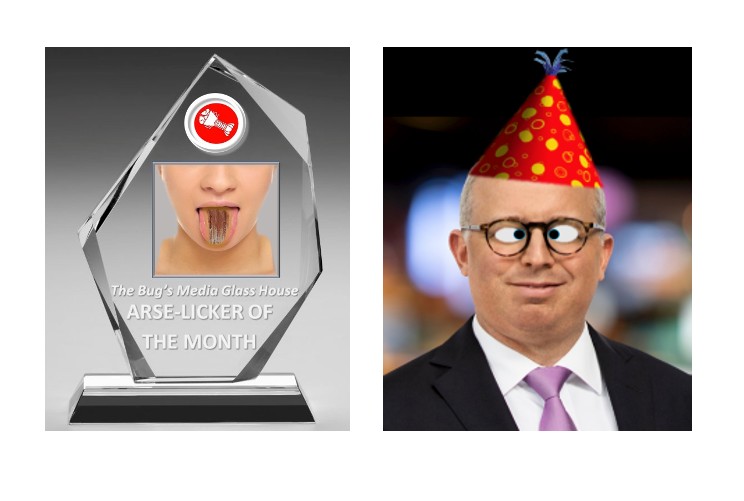 Good news! We have another strong entrant in the race for the Arse-Licker of the Month Award for May.

The latest to join the shortlist is James Morrow, the Daily Telegraph’s federal political editor who was beside himself – quite literally – in his coverage of Tuesday  night’s federal budget.

Two stories by Mr Morrow appeared next to each other on the second page of the Tele’s special budget wraparound on Wednesday. (pictured)

Both were 100% laudatory of the budget and its underpinning strategy, but also – and most importantly of all – those responsible for it, namely PM Scott Morrison and Treasurer Josh Frydenberg.

Mr Morrow even took the opportunity of having a pre-emptive strike against Labor and its leader Anthony Albanese, suggesting the budget had outfoxed and outflanked them with its big-spending approach.

It was left to heavyweight and longstanding financial and economic analysts such as Terry McCrann to ring the alarm bells over the debt and deficit strategy, but not until way back on page 14 of the liftout.

By then readers would need to have waded through page after page of positive headlines on top of a myriad of stories about what the Tele’s own editorial admitted was a budget aimed squarely at the re-election of the Morrison Government.

But back to Mr Morrow. He wasn’t finished yet with doing all he could to support the Morrison Government.

Come Friday’s edition of the Daily Tele, he shared a byline on a page 10 story on Anthony Albanese’s budget reply speech.

Well, it was partly about the budget reply and we guess that bit was written by the reporter whose name appeared next to Mr Morrow’s in the byline.

We guess it was Mr Morrow who penned the bits about Albanese’s speech supposedly being a rip-off of one delivered by US President Ronald Reagan in the 1980s.

We thought it was a bit of a stretch, nay a huge stretch, in fact a deliberate distortion, to concoct a charge of plagiarism against Albanese for posing questions that many pollies have posed – even before the late Ronnie Raygun we’d wager.

So, James Morrow’s name is firmly inked on our May shitlist… sorry, shortlist.