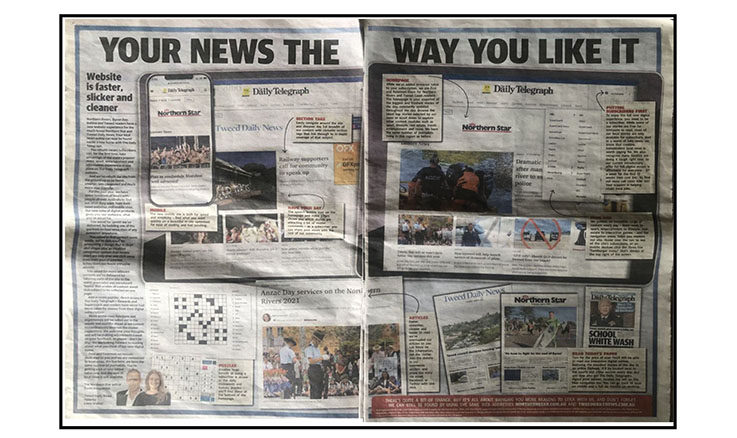 So how are things travelling for Newscorpse Australia almost a year since its giant “Fuck You!” to regional and country communities when it closed 112 of its printed mastheads around Oz?

The presses at 36 of those papers fell silent for good and 76 remained only as online mastheads.

The timely question was sparked for The Media Glass House when it stumbled across a presumably regional edition of the Daily Torygraph at Ballina Airport.

That edition included a two-page pitch (at top) to Northern Rivers residents with a fantastic two-for-one deal that the penny-pinchers at Newscorpse hope will be irresistible to them.

Two of the daily regional printed papers axed back in May last year were the Northern Star based in Lismore and the Tweed Daily News.

They became online only and this “But wait, there’s more!” offer from Sydney suggests online patronage has not been as good as their marketing projections suggested. These sites can now be found “inside a new home” – namely the Daily Torygraph.

That’s right! For just one subscription price, far northern folk can not only continue to enjoy a better, cleaner, jazzed up online Northern Star and Tweed Daily service but they’ll get the online Torygraph as well!

You lucky, lucky bastards! Access to Alan Jones and Peta Credlin basically for FREE, apart from the brain damage their regular toshed triped salads cause.

And how about that heading, eh? YOUR NEWS THE WAY YOU LIKE IT.

Apart from a good chuckle on the flight down to Sydney over the flim-flam marketing words that accompanied this sales pitch, the MGH obviously wishes them unwell.

We thought all those closures almost a year ago were real cunt acts and we pointed back then to the size of the Saturday Northern Star, chockablock with real estate and oodles of general display advertising.

We suggested that if Newscorpe couldn’t make a bob keeping maybe two Northern Star print issues a week – Saturday and Wednesday maybe – then they were as shit at running businesses as they are at putting out fair, balanced and professional news publications.

The MGH was delighted when several local entrepreneurs stepped in and when we last looked, appeared to be making a fist of putting out profitable local newspapers or news magazines in the Northern Rivers.

They are clearly folk who actually care about their local communities and we wish them ongoing success.

Editor’s note: Our apologies for the quality of the main image above. That copy of the Daily Torygraph did get quite crumpled on that Ballina-Sydney flight as we shook with mirth as we imaged those Newcorpse marketing wonderkids tossing buzzwords and slogans across the table and high-fiving one another with each new piece of creative flim-flammery.

OMG! Just as MGH had convinced itself that Eddy Maguire had given away too much money on Millionaire Hot Seat and had sent Nine Entertainment broke, Channel 9’s very slow streaming service 9Now has finally got its act together.

Well, sort of. Just a little bit anyway. You could have knocked MGH down with a feather when it checked 9Now’s “9 latest news” clips on Wednesay morning (below) and there are actually THREE current stories at the head of their news clips! Humble as it is, it’s the first update in some weeks, not a good look for a station that boasts it’s No1 for the latest of news.

And right now, the rest are still from late March, including the wedding of Bindi Irwin.

It seems that after a long holiday break, 9Now’s online upload technerd is back at their computer and we wish them well as they bring Nine’s “latest news” slowly up to date!