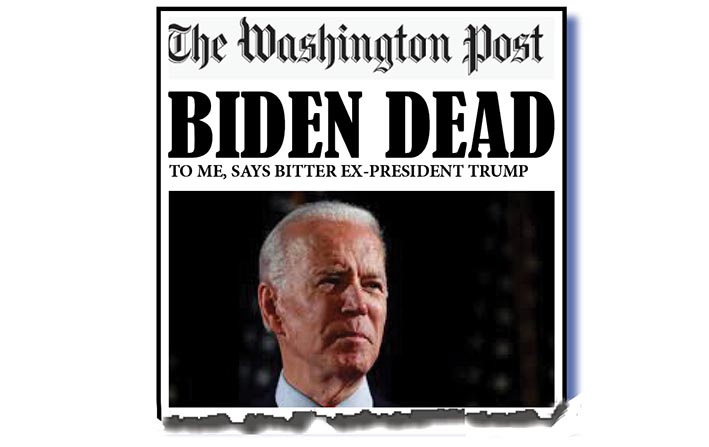 What do they say about people in glass houses throwing stones?

So before we throw a stone or two the Washington Post’s way for their recent front page (above) the washed-up old hacks behind MGH have to fess up that in the years of the hard-copy Bug, they resorted to the odd HOWARD DEAD or JOH DEAD or DOWNER DEAD heading.

Why? Well it made us feel good for starters. And it’s not as if we did it to increase sales ‘cos The Bug was free and copies got gobbled up quickly, if we can immodestly say that.

But as for this effort by a newspaper as respected as the Post? Shameful!

We appreciate that hard-copy sales of newspapers world-wide are in free fall – The Courier-Mail’s sales are dropping faster than a Year 12’s knickers/underpants at Schoolies – but sneakily trying to attract more street/pick up sales with something as childish as this beggars belief.

Surely they could have just waited a short while until Joe does actually pass.

A big cheerio to Geoff “Henry” Lawson for his lengthy and well-thought-out comment piece in today’s Sydney Sun-Herald about who should captain the Australian Test cricket team.

What a crying shame then that he ended it all with a true-blue clanger on the very last line.

For Geoff’s edification, the Ashes start on November 22 this year.

Where’s a good sub-editor when you need one!

Or is Mr Lawson one of those precious writers who don’t allow anyone to touch their precious copy?