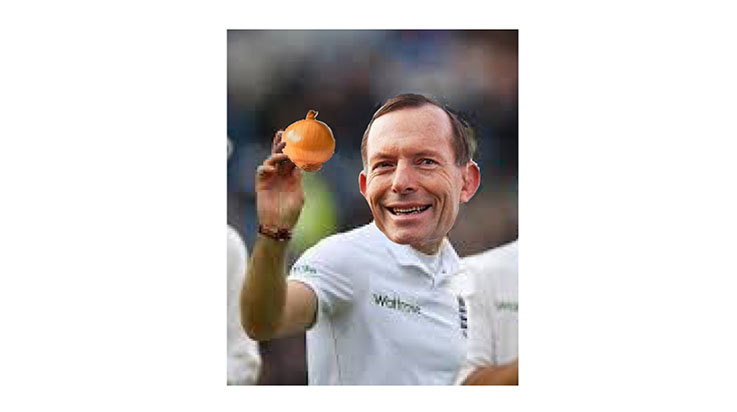 With a New Year approaching, the world’s most famous and by far the most accurate astrologer … EVER! … Kisma Aryias has decided to break with his traditional monthly predictions and do a full year’s prognostifications for his loyal followers.

January 7: You continue to have this crazy, recurring dream where Tony Abbott was never a politician or former Prime Minister but was instead a famous Australian Test bowler who was always taking five-wicket hauls (pictured at top).

January 27: You are saddened to hear of the death of former Australian and world media mogul Rupert Murdoch, but only because his son Lachlan is apparently an even bigger far-right-wing, money-hungry, power obsessed cunt than he is, as hard to believe as that is.

February 11: You’re rather happy that this year’s Oscars had no compere considering how badly Mad as Hell‘s Shaun Micallef bombed when he didn’t have a live audience supplemented by canned laughter.

March 29: While you are happy that the 2021 Sydney Royal Show has been allowed to go ahead, you and your kids can’t believe the strawberry sundaes are even lighter than normal.

April 1: You are shocked to read a column by Des Houghton in The Courier-Mail praising Anthony Albanese and hoping he will be the next Prime Minister.

July 23: You are very disappointed with the opening ceremony of the delayed 2020 Tokyo Olympics and consider the re-enactments of the Hiroshima and Nagasaki nuclear bombings in 1945 to be in exceptionally bad taste indeed, no matter how realistic they were.

July 24: As a public servant who always works at polling booths on election days to get some extra money, you listen to Scott Morrison’s latest pronouncement that he has absolutely no plans for an early election – “We never have winter elections,” the PM vowed as he promised he would definitely be a full-termer – and then automatically set aside late August Saturdays for such duties.

December 17: You can’t believe that it’s been six months since that male pangolin caught COVID-19 at Taronga Zoo and died, forcing the world-class tourist attraction to close its doors and operate since then only as Taronga Zoom.

December 31: At year’s end, you see yourself blowing off 2021 with even more venom and disgust than you did 2020 a year before… and quite frankly you would never have thought that possible.

January 9: You used to hate the Australian television “silly season” because you couldn’t watch Insiders but not any more.

January 20: You seethe with anger after hearing that the United States military attack on the White House to remove Donald Trump is only going to be screen on Foxtel and other pay-for-view platforms.

April 1: You are shocked to read a column in all the syndicated News Corpse papers by Peta Credlin lavishly praising Anthony Albanese and hoping he will be the next Prime Minister.

April 20: You marvel at what Joe Biden has achieved in his first 100 days in office as the 46th President of the United States, seeing most people thought he would have died of old age by now.

May 1: When the Bureau of Statistics releases figures showing a massive downturn in child births in the first quarter of the year, you suspect it had something to do with all the social distancing that took place in 2020.

May 12: You eagerly grab the latest Jack Reacher book by Lee Child but are then totally disgusted, not so much by the fact that his adventures of late have been crap, but that he doesn’t fuck or kill anybody in the first 170 pages.

June 4: It comes as no surprise whatsoever to hear that the much touted local vaccine for COVID-19 from Peter Foster Pharmaceuticals has proved to be totally ineffective.

June 20: Nothing much happens today.

July 24: You suspect NSW Blues coach Brad Fittler might be getting a little desperate when, in an attempt to save face and restore some battered pride, he drafts Peter Sterling, Blocker Roach and Glenn Lazarus into the starting side for the dead-rubber third State of Origin clash.

August 6: Not normally regarded as a funny person, you crack up your friends by declaring you won’t be having a Dagwood dog at the Brisbane Ekka this year for fear that they might have been left over from last year’s cancelled show and as a result taste funny and make you sick.

September 12: Considering you have some workmates who are bone-lazy pricks, you are secretly delighted when the federal government finally phases out its COVID-19 Jobsleeper supplement.

September 14: With the days heating up, you try on your togs (bathing costumes to you wankers down south) and wonder how on earth they could have shrunk so much over winter.

October 1: As a school teacher who always works at polling booths on election days to get some extra money, you listen to Scott Morrison’s latest pronouncement that he has absolutely no plans for an early election and will definitely be a full termer and then automatically set aside the first two Saturdays of November for such duties.

December 31: At year’s end, you see yourself blowing off 2021 with even more venom and disgust than you did 2020 a year before… and quite frankly you would never have thought that possible.