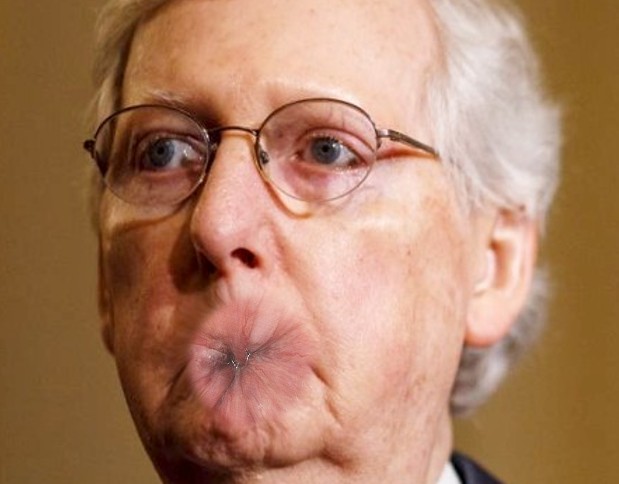 Leader of the Republican Party in the US Senate, Mitch McConnell, has been rushed to hospital in Washington DC.

The Senator from the state of Kentucky collapsed on the floor of the Senate and was treated by congressional medical staff until an ambulance arrived to take him to George Washington University Hospital.

Broadcast video from the Senate floor showed Senator McConnell speaking about the declarations made this week by the US Electoral College whose members met to cast their votes as part of the process for electing the next US President.

As anticipated, Electoral College delegates cast 306 votes in favour of Joe Biden and 232 for Donald Trump, confirming the Democratic Party candidate as the President-Elect who will be sworn in on 20 January 2021.

The Senate video showed Senator McConnell struggling to continue speaking as soon as he began his remarks confirming Mr Biden as President-elect, with his mouth rapidly constricting and twisting. (pictured right)

The deterioration in his condition progressed rapidly and by the time medical staff arrived his mouth had contorted into a tight anus-like orifice (main picture).

A spokesperson for the George Washington University Hospital said Senator McConnell was admitted on arrival and quickly diagnosed with a condition known as hyperanalstomia.

“Basically the condition occurs when a person’s mouth effectively turns into a second anus through which they can pass vast volumes of excrement,” the spokesperson said.

“It’s not uncommon for our medical staff to see patients, especially congressional representatives and senators admitted for mild to severe cases of hyperanalstomia.

“But Senator McConnell’s was the worst and most advanced we’ve seen. Period.

“The condition can gradually build up over time and in severe cases like Senator McConnell’s it can reach a crisis point and a patient’s sudden collapse can be triggered by a significant change in circumstances and the desire of the patient’s body –  and mind – to purge itself.

“It looks like the Senator has been suffering from it for at least four years, but we are confident he’ll  survive this episode and be back on the Senate floor soon,” the spokesperson said.