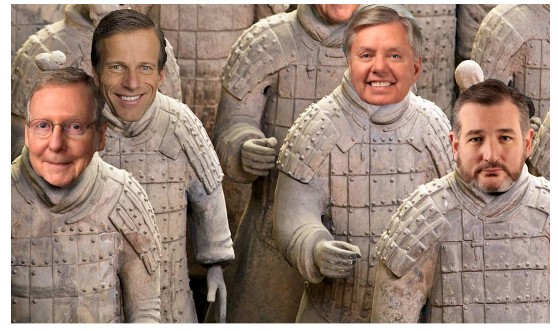 A four-year world tour of the intriguing exhibition, the Terracotta Republicans (main picture), is finally drawing to a close.

But the anonymous Washington-based philanthropist who has funded the extensive tour is understood to be refusing to describe the exhibition’s latest US leg through the state of Georgia as a farewell tour.

The Terracotta Republicans briefly toured Australia last year at which time the National Gallery of Victoria’s (NGV) director of exhibitions, Mervyn de Prave (pictured), said the ancient artefacts had both dazzled and indeed puzzled world audiences since they were discovered around January 2017.

“They are believed to be guards of the powerful but erratic Emperor Hai Per Bo Lee from the Smallhans Dynasty,” Mr de Prave told The Bug at the time.

“The Emperor created chaos and corruption within his own imperial court, wanted to construct his own Great Wall, and went out of his way to divide his empire by demonising peoples from surrounding nations,” Mr de Prave said.

During their Australian tour, the head of the Department of Archaeology at Monash University, Professor Clay Fondler, (pictured) said although guards were a common feature in all imperial courts, the Terracotta Republicans were unique.

“Remnants of the guards of previous emperors showed distinct signs of activism and involvement which indicates they were prepared to move against an emperor when it was deemed necessary and in the best interests of the empire,” Professor Fondler said. “But the Terracotta Republicans appear to have lost the power to speak or move.”

The anonymous American philanthropist funding the Terracotta Republicans was reported as saying he did not accept that the world tour would end on 20 January as planned.