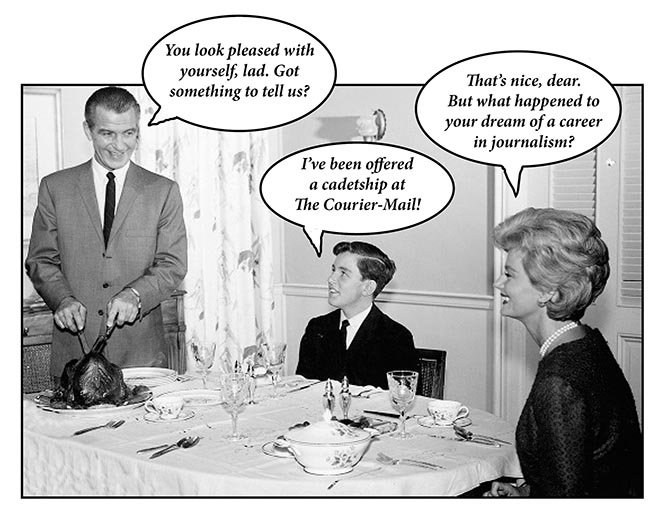 Summer is now upon us, and we all know what that means to the average Australian!

It’s down to the beach where your chances of catching a deadly melanoma increase ten-fold, as is the risk of drowning after a rip takes you out to sea, if a shark doesn’t get you first once you’re out there. Stay at home to avoid such possibilities and there’s every chance a bushfire will roar through and take you and your house with it.

But all Australians know there is one sure-fire way of surviving summer and that’s to heed the advice of the world’s most accurate soothsayer. Listen to what Kisma Artias says and the chances of seeing another Aussie autumn and winter are more or less guaranteed. It’s his promise to you.

Now that the dust has well and truly settled after the Queensland Labor government’s big win on October 31, you wonder what former Courier-Mail editor Chris Jones and former Sunday Mail editor Kelvin Healey are doing now and you naturally enough wish them well as they search for new jobs in the PR space.

You are exhilarated to overhear chit chat around your workplace suggesting you’ll be named sexiest man of the year at your office Christmas party, but then book a Hearing Australia test after you realise the award will actually be for most sexist staff member for 2020.

While shopping at your local Coles supermarket you decide you have no desire to purchase a Christmas cake because you’ve been buying and eating them since they first appeared on the shelves back in March.

But while shopping at Woolies you decide you’d really like one of the Easter eggs they began stocking and promoting a few weeks back.

You are delighted to hear that the re-elected Queensland government has invented an app whereby any communication or request or application to any government department containing the words “Palmer”, “Mineralogy” or “Waratah” is immediately shunted off to an obscure sub-committee that doesn’t actually exist for a five-year appraisal process.

You desperately hope your office Christmas party this year will run a lot smoother than last year’s, when you were thrown out early after asking several young female colleagues if you could give them a kiss under the camel toe.

You are rushed to your local hospital emergency department suffering from shock after you successfully thread the nylon string through your whipper-snipper’s cutting head at the very first attempt, especially as you had allocated 45 minutes for the task.

More strong approval figures for Scott Morrison in the latest Newspoll has you wondering what the rest of Australia sees in the cunt.

Your extensive social media campaign to extend the Free the Nipple movement to become the Free the Vagina movement falls apart after people realise you’re just a dirty old man, or at least a dirty middle-aged one.

You come to the conclusion that if anyone should be able to realise when they’re a bit on the nose, then it would have to be Gladys Berejiklian.

After watching a weekend of sport on Channel 9, you come to the conclusion that the chances of ever seeing a damning segment on the dangers of online gambling on any of that station’s news or current affairs shows is very grim indeed. In fact, Sportsbet offers you 100 to one.

You can’t believe your luck when, walking down a darkened alley late at night armed with a 3kg cricket bat, you encounter Rowan Dean.