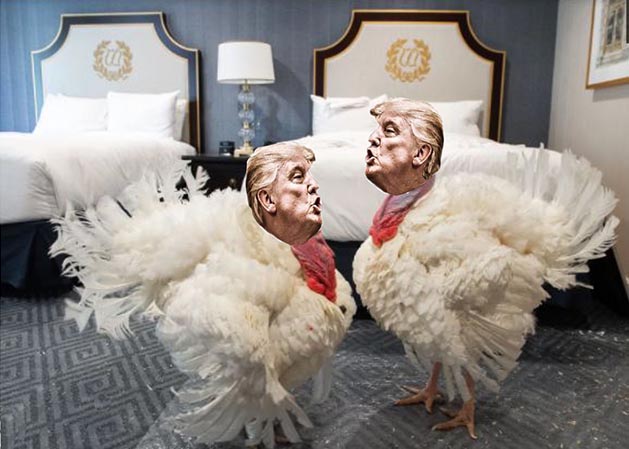 WASHINGTON, DC: Mental health experts here have expressed concern over US President Donald Trump’s state of mind after he ignored the two turkeys up for pardon at the annual White House Rose Garden Thanksgiving ceremony and repeatedly pardoned himself instead.

“That he also hacked away at Corn and Cob with a meat cleaver borrowed from the White House kitchens was not a positive sign and certainly will have left a lasting and, I suspect, an unfavourable impression on all the children present,” one respected Washington psychiatrist said.

Another added: “These events suggest he’s taking his defeat in the presidential elections rather badly.”

WASHINGTON, DC: US President Donald Trump, his face and bouffant splattered with turkey blood and the occasional feather, has used a hastily called media conference at the White House to claim credit for the end of the last Ice Age 11,700 years ago.

“No wonder it’s so hot,” the outgoing president exclaimed at the end of a short 61-second media call, stunning the socially distanced media present by ripping off his suit, shirt and tie to reveal a pair of Aussie speedos brandishing an ad for Trump’s Scottish golf resort.

CANBERRA: Prime Minister Scott Morrison is hopeful his time in quarantine following his visit to Japan can end by Friday so he can enjoy his usual long weekend break including a trip to Bunnings.

“He’s keen to put together a national cabinet flatpack Bunnings has just put on its shelves,” an aide said. “All the major papers and networks are on standby for that exciting photo/video opportunity.

“It’s important they come along otherwise Bunnings makes the PM pay for these DIY products.”