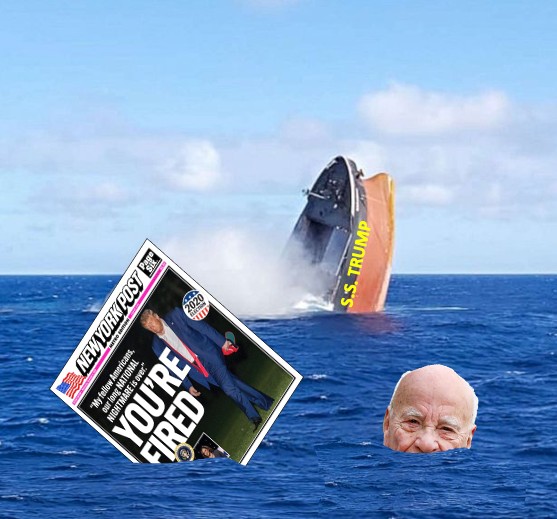 Rupert Murdoch has performed his trademark manoeuvre of jumping rodent-like off a sinking ship and leaping on board a passing bandwagon, all for the usual and purest of reasons of course – to continue making money and trying to wield influence and power.

As it became clear Joe Biden will be the 46th President of the United States of America, Rupert’s New York Post published a front page playing on Trump’s trademark phrase from his reality TV star days on The Apprentice. (pictured)

It looked for all the world to see that Murdoch and his cronies were reflecting public attitudes by sinking the slipper into the 45th President using his own catchphrase.

But is that what was going on?

The front page quote – “My fellow Americans, our long national nightmare is over” – may look like a last gasp attempt to suggest the New York Post never really liked Trump.

People walking past stacks of Posts not being bought on the streets of the Big Apple could be forgiven that the quote was one overnight from some leading Democrat sinking the boot.

But the words are not a contemporary reflection of recent events. They were spoken by former President Gerald Ford in 1974 after he succeeded the disgraced Richard Nixon who had inflicted years of turmoil and uncertainty on Americans in trying to defend himself against allegations of wrongdoing following the Watergate break-in.

Ford wanted to let Americans know the daily ordeal of watching a presidential administration disintegrate was at an end.

If the New York Post viewed the Trump term as a “long national nightmare” its last-minute front page pro-Trump editorial and earlier anti-Biden spalshes (pictured) didn’t reflect any such stance.

No, we come down on the side of believing that Rupert has simply done what he usually does – jump from one winner to the next in his greedy self-centred unprincipled bid to retain political and market power, and relevance.

There is one other possibility that the Glass House has largely dismissed. Long-serving Post editor Col Allan – known affectionately to those who worked with him at the Sunday Sun in Brisbane as Col Pot – retired about the same time the “You’re fired” edition hit the streets.

The theory goes that while Col Pot was on the piss with his senior editors, the poor bastard who threw that front page together is now on the jobs market after Murdoch spotted it and choked on his cornflakes.

The theory carries some weight given that his own Fox News Network has been one of Trump’s major cheerleaders and a lot of Americans will find any attempt to be Joe Biden’s long forgotten BFF a little hard to believe, and stomach.

The New York Post’s pre-poll front page endorsement of Trump joins a growing list of embarrassing attempts by the Murdoch organisation to swing elections for rag tag right-wing rat bags by telling voters what’s good for them only to have those same voters do the unthinkable (at least in Murdoch’s eyes) and think for themselves and then do the opposite.

We most recently saw it, yet again, in the Queensland state election in which News Corp Australia newspapers in the state resembled LNP pamphlets and how-to-vote cards.

They did the same at the 2015 and 2017 Queensland polls, and also at the elections previously won in Victoria by Labor’s Dan Andrews.

Despite Rupert and Co’s best efforts, Queensland voters spurned the LNP and gave Labor another term in office, this time the historic first four-year term for a Queensland administration.

You might recall that Rupert’s favoured LNP, and its leader Deb Frecklington, were unmasked by The Courier-Mail’s political writer Steven Wardill just days after the 31 October Queensland election as hopeless, lazy, irrelevant, and born-to-rule incompetents.  (pictured)

These were the same people The Courier-Mail was telling us should run the nation’s third biggest state.

Apparently the lacklustre qualities identified by Mr Wardill weren’t at all obvious to those steering the News Corp ship and penning its editorials or deciding on its blatantly skewed anti-Labor and pro-LNP coverage.

Or are its various editors simply beholden to directives from Rupert to mirror his personal right wing view of the world regardless of the damage done to the standing of local outlets?

News Corp news outlets clearly didn’t take the pulse of Queensland voters, and in New York its flagship turdbloid clearly doesn’t have a clue about the views of those living in the Big Apple.

Why else would the New York Post tell its obviously enlightened and, dare we say, leftish or at least more socially progressive audience that Trump deserves another term.

It gets more puzzling when you consider the results of the 3 November US election in the five boroughs making up the core of its circulation area.

In Manhattan Joe Biden received 84% of votes cast, in the Bronx it was 82%, Queens saw the former vice-president backed by 81% of voters, and he received a 74% share of the votes in Brooklyn.

Trump was ahead only in Staten Island with 61% of the vote against Biden’s 37%.

But across New York City as a whole, Biden’s majority support was hardly wafer thin.

His backers outnumbered Trump’s by a yuge … sorry, huge margin. A map of the citywide results – the one pictured is from The Gothamist website – clearly shows more and deeper Biden blue precincts than Trump red.

So why would a media outlet – if it believes one of its roles is to reflect its readers interest and outlooks — instruct them to vote for Trump?