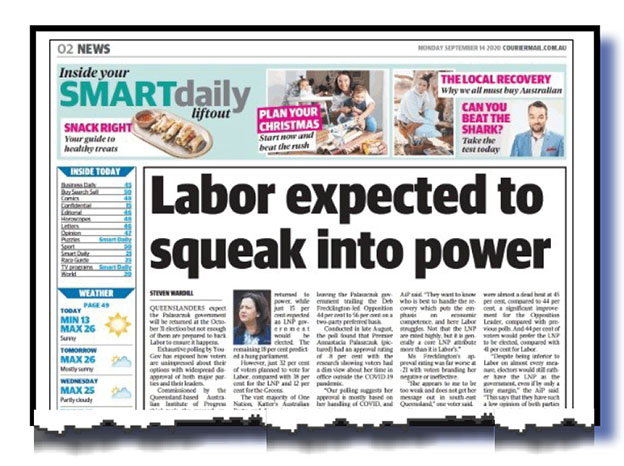 A senior sub-editor who was summarily dismissed by The Courier-Mail over a grossly misleading heading on a Queensland state election story hopes one day to find new employment as a real journalist.

The sub, who asked not to be shamed, readily admits the heading he wrote was “so, so wrong on so many levels” but has refused to use “an unbelievably stressful workload for the unforgiveable error”.

“There are so few of us left now processing so many stories and of course there was no check-sub or chief sub with any real experience to pick up my blue.”

The heading in question is shown at top and appeared in last Saturday’s edition of The Courier-Mail.

The sub’s unforgiveable error was to write a heading that suggested Labor was on track to squeak back into power for a story about a late-August poll that predicted a landslide victory to the LNP on top of a massive 56-44 two-party-preferred vote.

The Bug understands that as soon as senior Queensland LNP officials saw the heading last Saturday morning, they phoned the party’s Bowen Hills branch, the sub was contacted immediately and ordered back to the News Queensland building in Campbell Street to collect his shoe box of personal belongs and termination letter.

A colleague of the sacked sub described his friend’s actions as “a complete brainfade”.

“It’s been made perfectly clear to all staff by the LNP … sorry, our senior editors here … that we have to push the line that the LNP is on track for a big victory on 31 October and only Deb Frecklington can provide the strong, stable, unified, uncorrupted and much prettier, mother-of-three leadership to steer the state out of the economic disaster that is COVID-19.

“The last thing Queensland needs right now is a messy, hastily stitched-together coalition between the socialist ALP led by the frumpy, policy-barren Annastacia Palaszczuk and the tree-hugging, coalmine-hating Greens.

“So then along comes a poll, no matter how dodgy it might have been, that suggests such a landslide to the LNP and my mate fucked it up big time.

“Where was the “LNP landslide looms: respected poll” heading the story last Friday night was begging for?

“He knows it too. Shit, we’ll be pushpolling enough over coming weeks and really twisting whatever fresh polls that are published from now on to please the LNP … sorry, our editorial masters here… so I really don’t know what the fuck he was thinking.

“Who gives a flying fuck if the people polled thought Labor would win if only just. People all over Britain voted for Brexit confident that it wouldn’t happen.

“With that 56-44 split, Queensland Labor couldn’t win a pub meat tray even if they bought every bloody ticket!