A snap meeting of journalists at News Queensland’s Bowen Hills HQ has voted unanimously to condemn the “blatant, unprofessional and shockingly biased treatment of political issues” by The Courier-Mail and Sunday Mail management.

All 103 staff at the 4pm Friday meeting – reporters, subeditors, artists and photographers – resolved to walk off the job for an indefinite period unless management of the two papers – and those also responsible for the Queensland content of The Australian produced in the building – immediately agree to adopt a fair, balanced and reasonable approach to the looming state election and political reporting generally, including at the federal level. 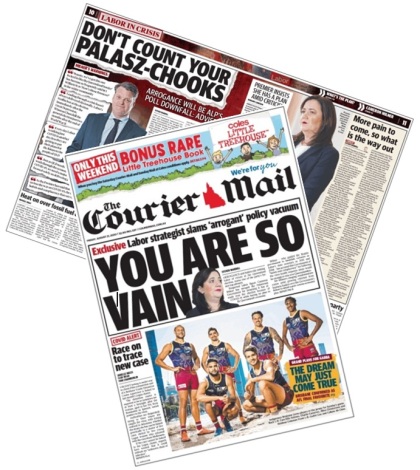 A number of angry staff waved copies of Friday’s edition of The Courier-Mail (pictured) as several spoke emotionally about how their reputations as professional journalists were being constantly tarnished by the paper’s “bring down the Palaszczuk government by any means” obsession.

Steve Wardill, who moved the motion to condemn the practices at News Queensland, said he could sometimes not face his family and friends over the humiliation he felt at the way his fair and balanced reports on politics generally and the looming state election in particular were “sometimes distorted ever so subtly to the right, sometimes more ”.

“Off my own bat, I wrote a great think piece the other day on who were the likely contenders to replace Di Frecklington and Annastacia Palaszczuk under various scenarios and they only used the Labor stuff,” he told his colleagues who then booed loudly.

One hand that shot up to support the condemnatory motion and which surprised many at the meeting was Des Houghton’s.

“I know I’m seen as some sort of silly old bugger who writes simplistic, risible rightwing rubbish all the time but do you know how often I’ve penned columns about all the good, decent and honest trade unions that are out there with hard-working officials doing wonderful things for their members?” he asked.

“They’ve all been spiked.”

Although no longer a member of staff, Renee Viellaris was allowed to join the meeting via video link and her voice crackled with emotion as she told how upset and angry she had become each morning while working as the Courier’s senior federal political editor.

“It was just horrible to to see my daily exclusive story on Scott Morrison’s latest leadership announcements littered with “glowing adjectives that I would never have used as a professional journalist to describe the Father of our Nation, no matter how great a job he’s doing.

One old-timer who must have really upset management at some time because he’s still hoping for the redundancy offer that will never come wiped a tear from one eye as he said: “The honorable stance taken here today by men and women just wanting to protect their livelihoods and their reputations reminded me of how strong the AJA was way back in the big five-week metropolitan dailies strike of 1980 over the introduction of new technology.

“I’m especially proud of some of the young ones here today such as Jessica Marszalek.”

“I hope I’ve spelt that right. They must know they’ve got fuck-all chance of finding any other job in this fucking dying shithole of an industry.”