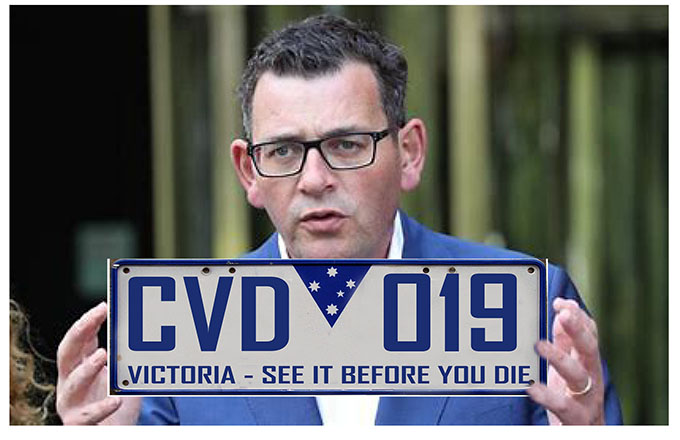 Victorian Premier Daniel Andrews must be wondering what he needs to do to get a break from the constant savaging he’s been receiving from NewsCorp outlets.

His media announcement yesterday of a naming competition for a new state slogan on Victorian number plates along with a plan to open the state’s borders has been savaged in today’s Herald Sun (below, right) despite a number of top political commentators and Peter van Onselen lauding the moves as “a brave attempt to make the most of a dire situation”. 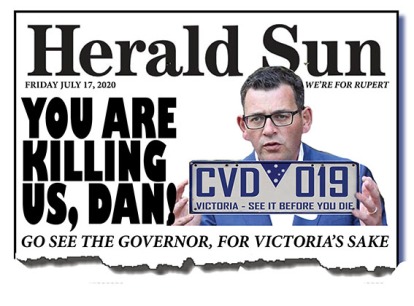 The Premier’s announcement came with Victoria back in COVID-19 lockdown, cases soaring and a growing political awareness across the states and the political divide that repression, rather than extinction, of the coronavirus is the only logical way forward.

“I’m calling on Victorians to come up with a new slogan that capitalises on the fact that we may remain a permanent COVID-19 hotspot,” he said.

“And if that’s the way it has to be, then let’s at least put on a brave face and make the most of it, right?

“We tried suppression, and that hasn’t worked. No-one thinks elimination is possible or makes any economic sense. So why not open our borders and try capitulation. Surely my friends at the Herald Sun would support that?” the Premier asked hopefully.

“If other states don’t want us to visit, our reopened borders would mean all other Australians are welcomed here with open arms, especially grey nomads who are very unlikely to clutter up our stretched hospital resources for very long.

“It should also attract the terminally ill put off by our residency requirement under our strict assisted dying laws.

“Put together, my plan is a win-win for everybody, including retail, hospitality and tourism sectors and of course funeral parlour, cemetery and crematorium owners.”

The competition winner will receive the personalised numberplate used by the Premier at yesterday’s media call.

A scathing editorial in today’s Herald Sun said it was a humiliating and pitiful sight to see a once-popular Labor leader desperately pretending he had some level of business skill and marketing nous normally associated exclusively with the Liberal and National parties.

“Only the LNP knows how to manage well economies shattered by a pandemic,” the editorial said, calling – for the 123rd time since COVID-19 emerged some months ago – for the Premier to call an immediate state election before quitting politics for the state’s good.