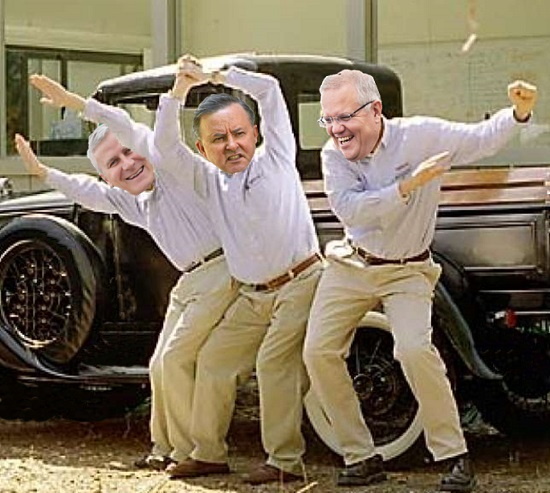 Leaders of governments of all political colours across Australia have agreed on a new form of social greeting in the wake of advice to avoid handshakes and other skin-to-skin contact during the COVID-19 pandemic.

Prime Minister Scott Morrison said a meeting of National Cabinet had decided that the only acceptable form of greeting was one involving no contact with another person’s skin.

“In other words, even an elbow tap is now out.

“As part of the National Cabinet hook-up every state premier and territory chief minister unanimously agreed with a proposal of mine to ban handshakes as a form of social greeting,” Mr Morrison said.

“We all acknowledged the risk of transmitting the coronavirus through the type of skin-to-skin contact that occurs when shaking hands and we all agreed on the need to minimise the chance of spreading any future virus to prevent it also becoming a pandemic.

“So we will be banning handshakes and instead endorsing and encouraging Australians to greet each other by butting butts.

“This is a simple substitute for a handshake and involves people butting their butt cheeks with those of the person they are meeting or greeting.”

Mr Morrison said it was important to remember the new greeting had bipartisan support.

“I was very pleased today to join Deputy Premier Minister and National Party leader Michael McCormack, and Opposition Leader Anthony Albanese to show our united backing for the new greeting (main picture) which we all agree will soon become second nature to all Australians,” he said.

Mr Albanese said the Labor Party was pleased to support the “butt butts” proposal not only for its public health benefits.

“We also support it because it’s a non-sexist gesture which is a very important consideration in the Me Too era,” he said.