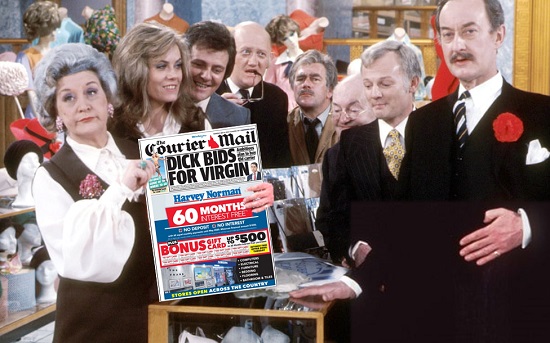 Brisbane’s daily paper The Courier-Mail has been announced as the winner of a prestigious international media award.

The UK-based Double Entendre Appreciation Foundation yesterday held an urgent meeting of its judging panel at its offices in Cockbush Avenue in London to decide on a special award for yesterday’s edition of the News Corp Australia turdbloid (main picture).

Chair of the DEAF judging panel, Mrs Molly Slocum, said not all judges could be physically present for the decision.

“Unfortunately due to the COVID-19 pandemic we had several of our judging panel who had to join our meeting via telephone or via the internet,” Mrs Slocum explained.

“But luckily they could all join in the decision-making from their homes in places as far away as Fanny Barks in Durham, Brown Willy in Cornwall, Cockintake in Staffordshire, and Titty Hill in Sussex.

“I must say the panel was unanimous in its decision to give the special Golden Tee Hee Award to The Courier-Mail for its headline on the story it ran on Thursday about Queensland Treasurer Cameron Dick and the government’s financial rescue bid for the Virgin Australia airline.

“It’s not often we see such a fine example of the subtle art of the double entendre.

“It goes to show the value of our organisation. No matter how politically correct the world has become it’s good to know we are still DEAF,” Mrs Slocum said.

She said in the wake of the easing of pandemic-related restrictions in the UK, plans were under way to hold the 2020 DEAF Awards presentation night in December in the Scottish village of Blackdikes.