The show normally has three journalists on the panel with host David Speers but this week Renee Veillaris is on.

Channel 9 Sydney’s prime time news on Friday night had some really important breaking news, even if it was fake news.

Presenter Georgie Gardner told her viewers rather breathlessly that NSW Arts Minister Don Harwin had resigned “from Parliament” after copping that $1000 fine for travelling to his holiday shack on the central coast, thus breaching the ban on non-essential travel due to coronavirus.

Bug staff monitoring news broadcasts in its 42-terminal mezzanine media hub above The Bug’s humming main newsroom all shouted “BULLSHIT” in unison, instinctively knowing that Harwin had about as much chance of resigning from his highly paid seat in the NSW Parliament as voluntarily going on a Jenny Craig diet plan any time soon.

We mean, really. Look at the bloke. Where else is he going to get the income required to pay for the pies, sausage rolls, cream buns and donuts that have kept him in such shape for so long?

Sure enough, later in the bulletin the pretty tyro girl reporter (is that a tautology pile-on for Channel 9?) had gotten the story right, saying Harwin had only resigned from Cabinet even though he remained adamant he had done nothing against the rules and had acted in accordance with public health orders. Why fucking offer to resign, then?

Anyone who has conducted a conversation with another human being, let alone a formal interview for a media story, can always think of a question after the event that they should have asked.

Certainly if you are writing for a media outlet, readers of your finished product –  especially picky and narky individuals such as those making up The Bug’s media analysis team – will identify such never-asked questions for you.

Such was the case when we read a story in the business pages of Saturday’s edition of News Corp’s Brisbane daily The Courier-Mail. 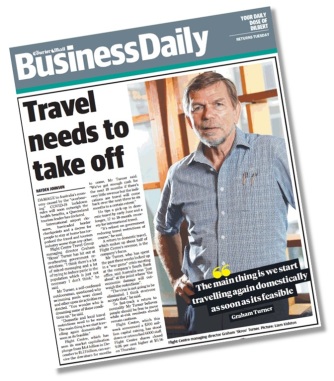 The story (pictured) based on an interview with Graham Turner, the managing director of listed travel agency Flight Centre, focussed almost entirely on his argument that many measures imposed on Australians during the current COVID-19 lockdown were too onerous and needed to end asap so that certain folk could be free to travel.

“The main thing is we start travelling again domestically as soon as its feasible,” he is quoted as saying while the story notes that Flight Centre’s notional market capitalisation has gone from $4.4 billion to $1.23 billion in the past few months.

Mr Turner claimed his company could survive the financial impacts of the virus responses put in place by governments across the nation and around the world and had enough cash at hand to operate for at least the next 18 months.

Now we believe Mr Turner is entitled to express his view on travel restrictions but most readers would place his comments into the “well, he would say that wouldn’t he” category.

So it would have been nice to see a simple and very obvious question reflecting that line of thinking, especially given the number of coronavirus cases that have spread from people who have been travelling or are the staff of firms such as airlines providing travel services.