Should this year’s Walkley awards have a new category – most tenuous, illogical and when you really think about it, totally pathetic attempt to link a story to Coronavirus?

Well, if such an award is handed out in front of an empty venue later this year, The Bug thinks it might already have a winner in Juanita Phillips and last night’s prime ABC Sydney 7pm news bulletin.

At the start of the show, Juanita read out the news highlights, including this gem: “…and cashing in on Coronavirus chaos, thieves raid a luxury Sydney jeweller…”

We know. We know. Don’t get us started … because we already have.

To be totally fair – and The Bug always is – Juanita in introducing the segment by crime reporter Mark Reddie later does explain the jeweller feels “like it’s a sign of the times with Coronvirus prompting increasingly desperate acts”.

Indeed, the jeweller admits he thought something like this could happen because the virus was making people act crazy.

All fair enough, and one person’s view, but we’ll still take exception to the “cashing in on Coronavirus chaos” slant at the news bulletin’s opening.

Regardless of the jeweller’s comments, Aunty has a higher responsibility to its viewers for a sensible, balanced, non-hysterical overview of news events. 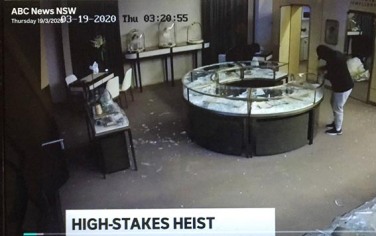 Exactly how did these brazen thieves cash in on “Coronavirus chaos” when they smashed and grabbed their way through the jewellery store in the wee hours of the morning?

Were they three hospitality workers so angry at being laid off from their shit-pay casual split shifts at a local cafe that they’ve been forced to stage a very professional jewellery theft rather than one done, ahem, chaotically?

Or perhaps they were laid-off Qantas pilots and cabin crew who Alan Joyce was unable to get shelf-stacking work for at Woolies?