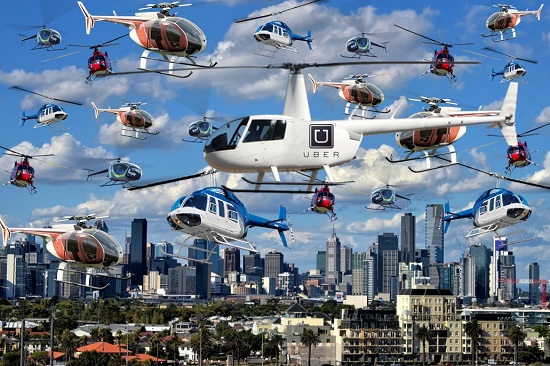 News broke this week of plans by global ride-share company Uber to trial helicopter fleets in three cities around the globe — Los Angeles and Dallas in the United States, as well as Melbourne (pictured). The Bug quizzed Uber’s spokesperson in Australia Ray Ting about the plan. 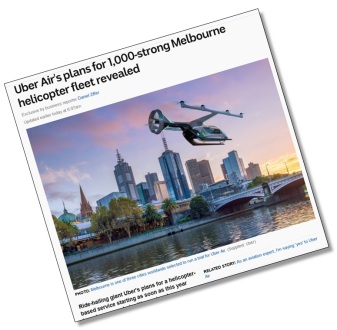 The Bug: Thanks for giving me your time today.

The Bug: So, I’ve read that you’re looking at having 1,000 helicopters in each of the trial cities. That’s a huge number.

Uber: Yes, it is but we need a critical mass of operators because as with our ordinary TPPTS we must….

The Bug: Sorry to interrupt. The TPP….what?

Uber: TPPTS. Our terrestrial pre-paid transit service. That’s our on-road Uber cars you might be familiar with.

Uber: As I was saying, we need a critical mass of operators because as with our TPPTS not all operators are active at any one time, plus with Uber Air we need to take into account possible ZAAIs.

Uber: Sorry. Zero-altitude attainment incidents. We need to account for possible ZAAIs which means not all helicopters may be able to take off at any given time due to the need for servicing or mechanical faults or even the weather in a particular area.

The Bug: Yeah. If that happens there’s still a hell of a lot of choppers scooting around over Melbourne skies. How do you guarantee the won’t collide?

Uber: Rest assured we have been using the most advanced computer modelling systems available to extensively workshop numerous scenarios including USASSEs.

The Bug: By that you mean mid-air crashes?

Uber:  See, that’s why we prefer to  shorten it to USASSE. Your terminology is a tad emotive.

The Bug: Well I suggest that’s appropriate because people lives are at stake, both the passengers in the air and possibly innocent people on the ground if a chopper falls out of the sky…. and from now on could you please stop using acronyms? I’m getting a headache.

Uber: Sure. You’re asking about when one of our aircraft experiences rapid de-escalating altitude.

The Bug: Whatever. If it falls from the sky it can kill innocent people on the ground.

Uber: We are well aware of the risk of ground-based non-client terminations.

The Bug: GBNCTs. Got it. It seems to me that safety is the first priority for a service like the one you envisage but from what I’ve read Uber Air itself won’t be the one to guarantee the airworthiness of the helicopters. It’s going to be the individual pilots or chopper owners who are responsible for the safety and maintenance of their aircraft.

The Bug: So Uber gets all the revenue, passes on some of it to the helicopter operator, and when one of them comes crashing to earth your company…..

Uber: Has an unplanned air-ground interaction.

Uber: Do I really need to explain what happens when an aircraft experiences an unplanned air-ground interaction?

The Bug: Point taken. So when that happens you’ve got all the money from the passengers but you just walk away. Have I got it right?

The Bug: Isn’t that just a case of “all care and no responsibility”?

Uber: Well, we like to think of it as “all fare and no responsibility”.

The Bug: Thanks for the interview, but I’d only give you one star.

Uber: Well I’m going to fix your average permanently at one star, so you’ll never get another interview.