The Royal Australian Mint has decided to issue a two-sided coin – and it could very well be the first two-sided coin it’s ever pressed, at least since the last one.

This breathtaking news comes from Brisbane’s leading daily tabloid newspaper The Courier-Mail on Wednesday (clip above).

From yesterday, two million of the $2 coins will be released into circulation. The coin features a female cricketer for the first time, Alyssa Healy, as Australia prepares to host the T20 World Cup.

Without explaining why – probably to save embarrassment at the tenuous nature of the whole exercise – the intro says the coin ironically would be “not good enough for the toss”.

But The Bug has worked out what they were trying to say as a special offer for our viewers. See, the coin must have two heads; Alyssa’s on one side and on the other some old biddy pretending to be Gerry Connolly.

Let’s totally forget the commonsense point that a $2 Aussie coin would never be used for the toss to start a cricket match; it would probably get lost among the kikuyu grass or disappear down one of those cracks that used to gobble up Tony Grieg’s car keys.

But even if they did, it would apparently be totes beyond the umpire’s call to simply say: “Just remember that Gerry is the head and Allyse is a nice bit of tail!”

Which of course still goes no way to explain why the Courier sub still employed at the newspaper got so excited by the fact that this new coin has two sides. 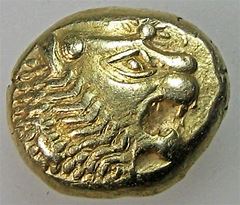 Detailed research by The Bug has shown that all Australian coins have had two sides since Federation.

Apparently, a small European country in the Middle Ages did try to introduce a one-sided coin into circulation but the experiment failed completely because no one could see it and it kept blowing away in the wind even if they could.