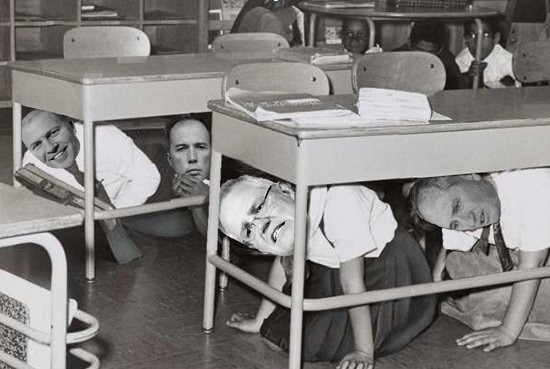 Prime Minister Scott Morrison has announced a $50 million education program to keep children safe in case of a climate catastrophe.

Under his “resilience and adaptation” program, children at all schools across the nation, both state and private, will be taught how to immediately protect themselves by ducking and covering under their school desks should a catastrophe warning siren sound via the PA system at their places of learning.

“Children are the future of this nation and the Prime Minister is determined to keep them safe no matter the cost through his brilliant ‘resilience and adaptation’ idea,” one of his media aides said.

The full-colour advertisements will explain how a siren, with a distinctly different sound to the well-known Australian cyclone alert, will sound for several minutes, followed by the repeated calls for students to get to their classrooms and show “resilience and adaptation”.

“That should give school kids plenty of time to get under their desks and protect themselves,” the prime ministerial aide said.

“Unless, of course, it’s the actual Rapture taking place.

“In that case, no audio warning will be issued and the little buggers can take their chances along with everyone else who has not been born again, heeded the good Lord’s warning and answered His call.”