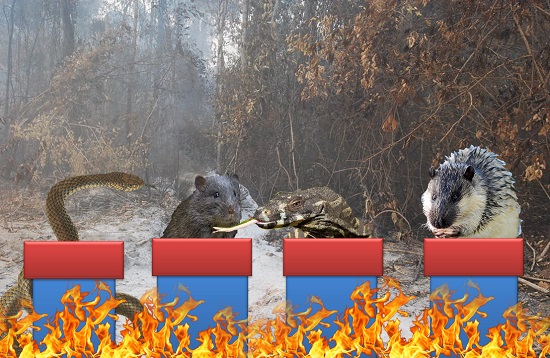 Some lesser known and butt-ugly Australian native animals have banded together to urge the public to think of them during the current bushfire crisis.

The animals claim too much emphasis had been placed on the fate of “cute and cuddly koalas” during the bushfire season.

“Look, we know people prefer to cuddle a koala and not one of us,” the goanna said.

“Sure koalas are cute especially baby koalas which, incidentally, are also incredibly tasty.

“But there’s more than koalas at risk in the current bushfire crisis. We’re out there too trying to stay ahead of the flames and trying to stay alive, so Australians need to think of us too.”

The brown snake agreed, saying it had personal experience of the double standards applied to native animals by the public.

“Just a day or so ago social media was awash with footage of a koala climbing on the bike of a road cyclist to get a drink from her water bottle,” the brown snake said.

“That video went viral and people all over the world were no doubt going ‘oooh’ and ‘aaah’ over that poor distressed and thirsty koala.

“But just this morning I tried exactly the same thing and the cyclist literally shit themselves. Have you ever seen shit ooze through lycra at high speed? It’s not pretty I can tell you. I high-tailed it out of there quick smart.”

Both the native swamp rat and rakali said the plea by ugly animals was not meant as criticism of koalas.

“We know koalas are suffering, but we are too,” the swamp rat said. “But when I stick my head up after a bushfire, people don’t rush to pick me up and give me water. They throw rocks at me.”

The rakali said it had become frustrated after experiencing similar reactions.

“Quite frankly, if things don’t improve I’m going to buy a very small koala onesie and take my chances,” it said.