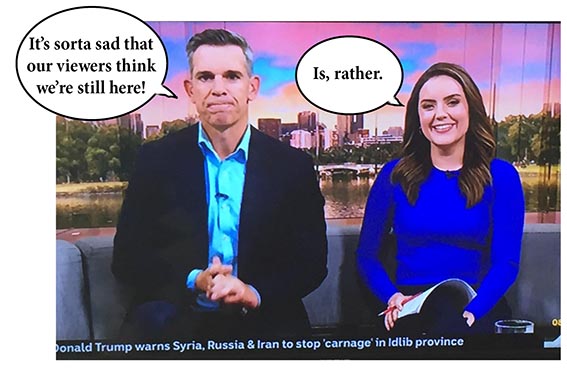 There were red faces all around the ABC’s Melbourne studios when a tape malfunction brought yesterday’s edition of News Breakfast to a shuddering halt.

Due to ABC budget cuts affecting both staff numbers and story availability, News Breakfast for quite some months now has been recorded live for only the first hour and then the show’s producers run the tape of that first hour twice on loop for the remaining two hours of the show’s duration.

As with normal practice, summer season co-hosts Paul Kennedy and Georgie Tunny yesterday recorded a quick farewell segment during the long 7am break to be played two hours later and then gave each other an affectionate Christmas season hug  before leaving the studios, happy in the knowledge that the first hour would run smoothly on replay.

The show resumed with the earlier stories on the Philippines storm, Trump issuing a warning over civilian deaths in Idlib province in Syria,  a Victorian library open 24 hours, a look at newspaper headlines and their earlier general banter about the pros and cons of Christmas regifting.

An embarrassed ABC producer told The Bug: “We haven’t had the money to do three hours of fresh and interesting TV news and current affairs for yonks. It was a problem long before the She Who Must Be Obeyed left.

“We simply haven’t got the reporters and BBC material now costs us a motza.

“Luckily, when the tape jammed at about 7.11am, Georgie had only wandered down to the Southbank boardwalk and was having a double decaf goat’s milk demi-latte and organic blueberry muffin at her favourite hole-in-the-wall.

“Unfortunately PK was already a few Ks away on his way home to Kim and his three boys but thankfully answered his hands-free mobile and turned around immediately.

“With the budget cuts, we had to let the real Nate Burns go some months ago but luckily we could get the animatronic hologrammed Nate we now use to do an extended weather report until the  real talent could get back on set.

“There was some brief dead air but I think we largely got away with it and hopefully our viewer was none the wiser.”