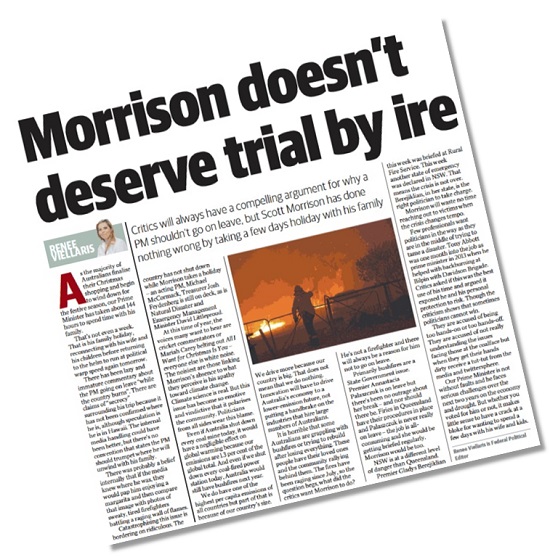 A matter of timing

On Friday morning Australians woke to the news that their Prime Minister had assessed the extent of the nation’s bushfire crisis and had decided he would cut short his Hawaiian holiday with his wife and two daughters and get his arse back home and back to work.

Most commentators acknowledged that the PM, any PM, was entitled to take a holiday; indeed some, striving to be very fair, reasonable and balanced (the ABC’s Andrew “not very” Probyn) saw nothing wrong with its timing either.

Admittedly Morrison was not cut the same slack by many using social media where, shall we say, a harder line is generally taken towards politicians.

But most reasonable observers agreed Morrison had a right to take a break, but the timing of the Hawaiian sojourn and the handling of his absence by his office created a major problem that could be solved only by scrapping his Hawaiian stay.

So The Bug’s media analysis team found it odd that on Saturday morning — more than 24 hours after news of the PM’s planned return broke — readers of The Courier-Mail in Brisbane were treated to a Renee Viellaris column (main picture) stoutly defending the PM almost as if he were not flying back home and was defiantly staying put in Hawaii. 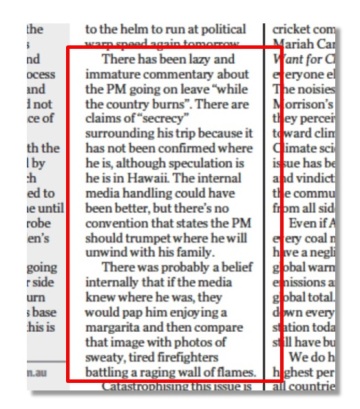 Defending whatever Scott Morrison does is nothing new for Ms Viellaris but it was somewhat bizarre that her column began with a brief reference to the PM flying home but then went on to say there had been criticism of the secrecy surrounding his absence “because it has not been confirmed where he is, although speculation is he is in Hawaii” (pictured).

By Saturday morning, Australians knew well and truly where their PM was. In fact they knew by Friday morning.

Perhaps if a columnist is going to attack “lazy commentary” by others on any issue they should make sure their employing media outlet does not give readers the unmistakable impression that they are running an outdated item tarted up with a few fresh lines up front.

The woefully outdated lines penned by Ms Viellaris were followed by a defence of his office’s hamfisted handling of his holiday with this line: “There was probably a belief internally that if the media knew where he was, they would pap him enjoying a margarita and then compare that image with photos of sweaty tired firefighters battling a raging wall of flames.”

Well, yes. Got it in one Renee, which makes her comment about the widely agreed cause of criticism of the PM’s break — that “the internal media handling could have been better” — somewhat of an understatement.

Not in the same league but a work in progress?

The Bug would never suggest that the SMH’s national affairs editor Rob Harris is in the same league as Renee Viellaris – really, who is? – but we think Harris has enormous potential as one of the new faces of the Nineification of Fairfax. The Costelloisation of it, as some say.

Just like Viellaris, Harris likes to throw supportive words and catchphrases into yarns that put the conservative side of politics in the best favourable light.

From the get-go, Harris contends that the PM “will return early from his Hawaiian family holiday today….” Who says, Rob?

And that Morrison had apologised for taking time off during the worsening bushfire crisis. Rob’s definition of an apology could be a lot different to most people’s.

Harris adds that Morrison “had planned to be away until Monday” – who says, Rob? – and “was scrambling to find a commercial flight to return yesterday”. Who says, Rob?

Certainly not the person who snapped the Morrisons sitting in a bar in Hawaii about 12noon local time Friday and about 9am Saturday in Australia.

To be fair to the PM, he might have just started to unscramble after all the scrambling he had to do to get a flight. If only he could have exerted some influence as, you know, a nation’s leader. One with his own jet, even?

There’s then a dozen or so creampuff paras about what Morrison intended to do on his return even though “I don’t hold a hose…. or and I don’t sit in a control room”, an explanation why he went on (read needed) the Hawaiian holiday in the first place, his praise for firies and his tribute to the two RFS volunteers had died.

And to be fair to Harris, he did throw some pars from Albanese at the end of his article. Even though she works for a different organisation, Renee might need to have a word to him about that sort of silliness.