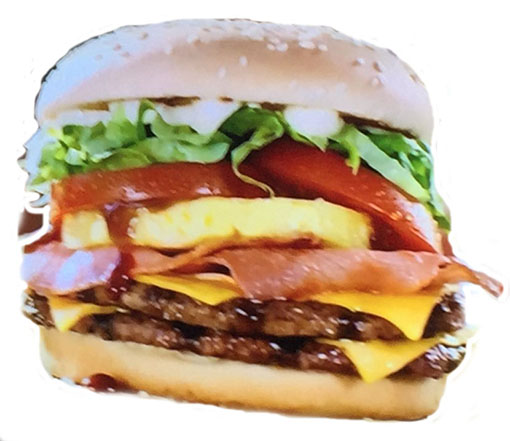 The Bug is proud to offer its readers a FREE hamburger deal in association with participating outlets of fast food chain Hungry Jack’s.

Simply order one of Hungry Jack’s new tropical whopper burgers and once you’ve got it sitting on your table and it turns out to look nothing like the advertised burger shown above, take it back and demand a full refund. Take a bite first.

In fact, have a printed version of that top image handy – or simply use your mobile to show the startled young kid behind the counter that image from this site – and say the promotional words: “I thought the burgers were bigger at Hungry Jack’s”.

Explain politely that the image you’ve shown them is from a TV ad, one that clearly suggests this is how your burger should look when placed on a dining table. Say that all that Hungry Jack’s tropical burger did, when compared with the advertised image, was make you think of Danny DeVito and Arnold Schwarzenegger in Twins.

Say nicely that the burger you’ve been given is nowhere near as high as it is wide and you’ll be lodging a complaint with the relevant consumer affairs in your state if your money is not refunded immediately.

And you’ll be keeping the burger as court evidence if matters sadly come to that. 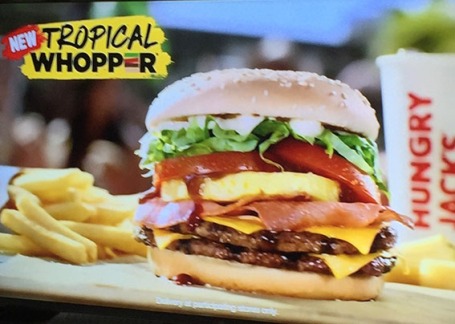 The startled kid might call over a supervisor in which case quietly repeat your demand and point out politely once more that the advertised image clearly shows the tropical burger away from the Hungry Jack’s counter and placed on a dining table after being freed from any wrapping or container.

In other words, any argument that your burger has been somehow squashed in the process of its presentation is indeed, a real whopper!

And because your whopper looked nothing like the one advertised,  you feel terribly short changed! The victim of an outrageous advertising whopper, in fact. Substantial damages may be sought.

If need be, act like a real rebel and declare: “I can’t believe it’s not a real-sized burger!”

And, please, keep taking advantage of The Bug‘s free hamburger offer at various participating Hungry Jack’s outlets but remember, this absolute whopper is only available for a limited time until their next special hamburger offer.