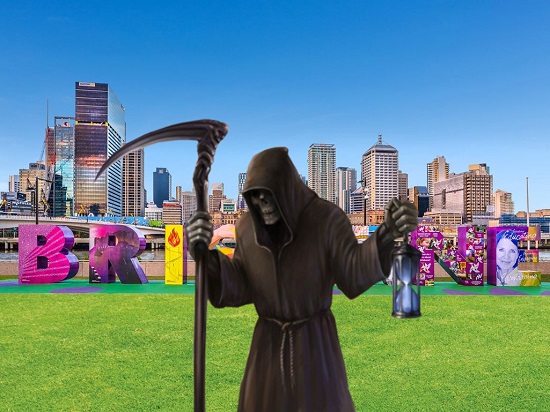 There may well be another, more rational explanation, but our media analysis team has noticed that death seems to have taken a holiday in Brisbane.

Or at least fewer funeral notices seem to be appearing in city’s daily tabloid The Courier-Mail.

Several of our staff members, especially those in older age brackets, have suggested that while the list of deaths and funerals at the back of the paper was previously quite extensive, these days it looks rather shortish.

In the old days before death apparently put his feet up in the Sunshine State capital, death and funeral notices — or “tributes” as the Courier now insists on calling them — would spread across several pages.

But a sampling of a few editions of The Courier-Mail last week showed a distinct contraction, so much so that the newspaper has been responding by inserting obvious filler ads of their own to flesh out the now single page that more than accommodates death and funeral notices (pictured).

In one edition the page was even shared with a slab of public notices.

There’s nothing wrong with in-house filler ads here and there whenever a newspaper finds an odd spot it can’t sell or otherwise fill.

But The Courier-Mail is going a little overboard, we suggest, by running ads for its own “tributes” that sometimes appear to account for almost half a page.

Surely there is a stray story, photo, or charity ad that might be inserted instead to at least give the impression that the hard-copy Courier is not soon to have its own name in its tributes list?

Or perhaps when the Grim Reaper has finished his holiday things may begin to look up.

Speaking of death, it’s obvious on occasions to see that old habits die very hard in the media game.

Take the old “page 3 girls” for instance. Large photos of scantily clad pretty young women were often the mainstay of page 3 in some, shall we say, “popular” newspapers. Some may use the term “downmarket” but let’s be generous given that some of the more racy publications featured them topless!

But it’s good to see this significant component of newspaper heritage is not dead in the Townsville Bulletin which featured a shot of two young local females in their bikini tops in a recent page 5 story on weather bureau predictions for storm season (pictured).

Full marks to the snapper for including an umbrella which is no doubt there to assure readers the photo relates directly to the subject matter in the story and that they don’t mistake it for some cheesy attempt to feature female flesh just for the sake of it.

We know that they meant

Look, we all know that now and then a headline or two slips through that may, if taken literally, give rise to misinterpretation.

A prime example was afforded in an item on ABC News Online recently (pictured) which cited an energy market report claiming one Australian state (Queensland) would soon save $278 a year in electricity costs.

Now any reader would know that $278 divided by around two million households in the state can’t be much of a saving in a year.

So maybe just an extra word here or there in the heading might have prevented narky comments like ours.