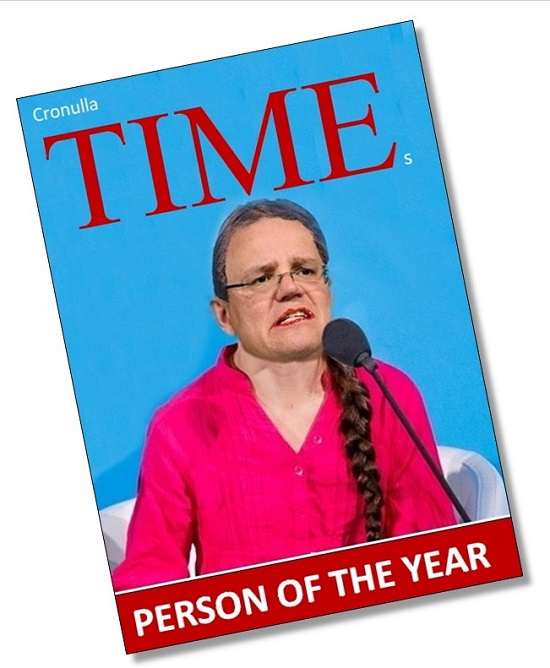 PERSON OF THE YEAR:

Australian teenage climate change activist Scomo Turdberg has been named TIMEs’ Person of the Year for 2019.

The prestigious award was announced last night at a glittering launch party at the Cronulla RSL for the December edition of the Cronulla TIMEs magazine.

Chair of the TIMEs’ editorial board, local real estate agent Henry Loose, said 16-year-old Ms Turdberg was a worthy recipient of the annual Person of the Year Award.

“She has impressed many with her reputation for speaking her mind and telling it like it is, especially on the issue of climate change.

“She is not afraid to take a contrary stand in the face of criticism and I for one salute and congratulate her for swimming against the tide. And by the way here in Cronulla she is swimming  against a rising tide, quite literally.

“Yeah,” Mr Loose mused to himself, “I’m not really sure why the tide is rising so much around these parts but I wish it would stop. It’s making it bloody hard to flog beachfront properties.”

Mr Loose said Ms Turdberg was the youngest recipient of the magazine’s Person of the Year Award.

“It’s good to see a young kid take out this award which we’ve given to a range of locals over the years,” he said.

“This year’s award shows the magazines’s editorial board is not afraid to make bold choices, just like  we did in 2005 when we gave a special group People of the Year Award to local anti-immigration rioters.”