Bookies have quickly reshaped their odds for an LNP win at next October’s Queensland elections after a fired-up Premier Anna Palaszczuk came out punching – and punching hard – over the weekend.

“Kicking heads, more like it,” one relieved Labor adviser told The Bug. “Do you know how long many of us have waited to see this?”

Another, wiping away tears, said: “Who would have thought the Polish Princess would turn into the Freckle-puncher I’ve been dying to see for so long now.”

Previously the odds-on favourite as next state leader, Opposition Leader Deb Frecklington has blown out to a 3-1 chance after the Premier declared: “Who do Queenslanders want to run this state? That sad-sack old right-wing flaccid-arsed increasingly senile, evil, octogenarian Yankie bastard Rupert Murdoch or me?”

Not apologising one iota for her language, Ms Palaszczuk announced that all government advertising with “the LNP’s Bowen Hills branch” would cease immediately.

“I should have done that the day I thrashed that one-term wonder Campbell Newman years ago!”

The Bug understands the catalyst for the Premier’s fiery outburst was another day of biased, unprofessional “reporting” in Friday’s edition of LNP newsheet, The Courier-Mail.

The paper’s splash covered a plan by Ms Frecklington for a multi-billion-dollar Bradfield-inspired scheme to drought-proof large parts of western Queensland.

The Bradfield Scheme, a proposed water diversion project designed to irrigate and drought-proof much of the western Queensland interior, was devised by Queensland-born civil engineer John Bradfield. It was abandoned as unworkable in 1947.

The main story in the Courier’s inside pages made great virtue of the new project and virtually anointed Frecklington as the next Premier.

On a page strapped ELECTION SALVO, the Courier subs went to town with the punchy jockey line: “Frecklington hell-bent on winning state election with decade-long dam project”. The story had no room for any government reaction or comment but then again why would you? 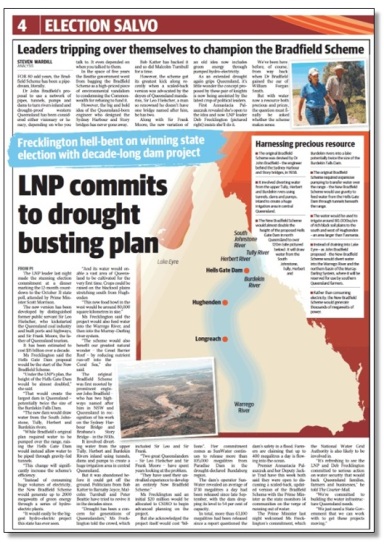 Ms Palaszczuk told the media at the weekend: “Does anyone seriously think I’m going to get any such creampuff support from the Courier or Sunday Mails and other Murdoch shit rags around the state over the next 12 months?”

In a wide-ranging mea culpa, Ms Palaszczuk apologised profusely for the pro-mining stance she has taken since the May 18 federal election.

“I still can’t believe I fell for that bullshit article the Courier ran after the  May 18 federal election that voting figures there spelled doom for my state government.

“I was conned, basically, seeing  I won the last state election in my own right being tough on Adani – well, eventually, at least.”

To stress her newfound attitude to the future of any new coal projects in the Sunshine State, the Premier held up several unopened boxes of bespoke sex toys made out of Galilee Basin premium black coal presented as official gifts to various Ministers in recent years and dramatically threw them at the assembled media who tried their hardest not to catch any of them.

“We won’t be needing them anymore. We’re breaking up.

“And I’ve had enough of Gautam Adani too. If his project goes ahead with no help whatsoever from my government, that’s fine.

“I just want to apologise for the rod I created for my own back by going along with the highly inflated jobs figures those shit papers used for so long for the project. What a crock of crap compared with tourism jobs that will continue if we fight hard to keep the Great Barrier Reef.”

Ms Palaszczuk also apologised for going over the top “Joh-style” with her news laws cracking down on public protests.

“A Labor government threatening people with jail sentences for protesting in the streets about what climate change will do to our planet,” she said.

“Really, what the fuck was I thinking?”