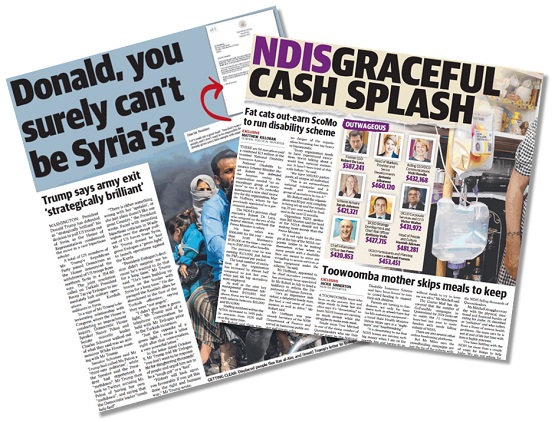 There’s a time and place

Puns in headlines can be fun, for sure. But sometimes they may be better left unprinted.

We at The Bug think that little bit of humble advice should have been ringing in the ears of whoever penned, or typed, the headings for two stories in yesterday’s edition of Brisbane’s daily tabloid The Courier-Mail.

On page 27 in its world news section the paper used a headline on a story about Donald Trump’s recent decisions on the conflict between Turkey and Syria (at left in main picture).

We know the joke that was being attempted but frankly it doesn’t work. It’s like trying to hammer a square leg in a round hole.

Earlier in the paper in its domestic news section it forced a reference to the NDIS into the heading on a story about the disability scheme’s executive pay packets.

Again, a bit too forced we thought. But never one to let go of an idea, we consider it will be interesting to see how often NDIS is used as the prefix for some other pejorative reference in future stories.

Friday’s edition of The Courier-Mail in Brisbane also took a rather curious approach to two separate but vaguely related stories (pictured).

On page 12 was an item about new “ugly” rashies with festive designs being promoted by the Cancer Council Queensland. 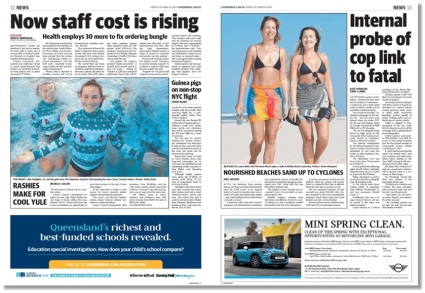 The idea, of course, is to buy one of the long-sleeved top and don it before you raise your risk of acquiring skin cancer after hitting the beach or swimming pool this summer in the sunshine state.

Sensible advice for all, plus your purchase helps raise funds for the Cancer Council to continue its good work.

The story carried a nice colourful photo of some young women wearing the rashies and having  a lot of fun posing for the camera.

Opposite that story, on page 13, was a seven-paragraph item outlining the success of the Gold Coast City Council’s beach replenishment and anti-sand erosion program.

Despite being such a short story it was packed with technical facts and figures from a report to the council.

So, what to use to illustrate that story? Of course, a pic four times the size of the story featuring two bikini-clad young women walking on a beach with not a sun-safe rashie in sight.

Don’t you worry about that

We had no plans to make this edition of our Media Glasshouse an exercise in bashing The Courier-Mail. But we will.

Members of our media analysis team at The Bug often remark on the rapid erosion in the number of sub-editors employed by news outlets across our nation.

This has led to an obvious rise in the number of mistakes of fact, style, or spelling  appearing in print, over or airwaves, or online.

In the past most of those mistakes would have been detected by a sub-editor before reaching the eyes or ears of media consumers.

These thoughts were top of mind when a keen-eyed reader pointed us to a reference to a former Queensland premier in a letter to the editor (pictured) published recently by Brisbane daily The Courier-Mail.

Being a rather well-known chap during and even after his time in office, we doubt his name had ever been so badly mangled in the pages of the News Corp tabloid.

Certainly in the past any sub who let it slip through like that would by now be looking elsewhere for a job that these days doesn’t exist.