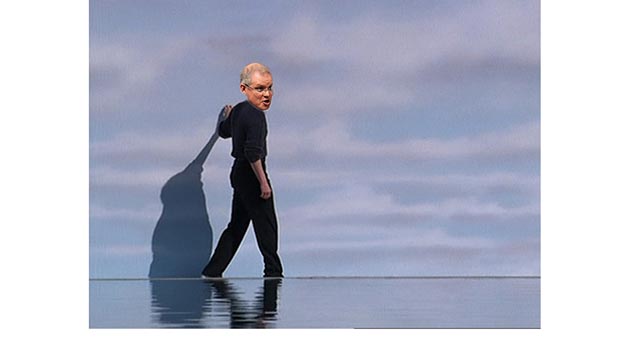 Prime Minister Scott Morrison has been taken to Canberra Hospital with non-life- threatening injuries after his ComCar smashed into the Canberra bubble’s southern perimeter base about 8am this morning.

TV footage shows the PM’s heavily armoured C1 limousine badly crumpled and its flag at half-mast about 20km out of the nation’s capital on the southern road to Cooma and the NSW snowfields.

The Bug understands the PM’s decision to take the unusual and unscheduled road trip was “to clear his mind ahead of this week’s parliamentary sittings”, according to a PMO source.

The ComCar driver was also injured and has been suspended from all driving duties.

“It’s almost unbelievable that the driver forgot where the base of the Canberra Bubble was to the south,” the source added. “It’s thicker there than just about anywhere else around the bubble’s edge.”

Canberran motorists and visitors are equipped with remote control clickers that open up portals around the Canberra Bubble’s perimeter on all major roads leading to and from the city.

Mr Morrison normally travels in and out of Canberra by the government jet from Canberra Airport which is located just outside the Canberra bubble but is accessible through one such well-maintained portal.

The PM’s injuries are not that grave although he will undergo rigorous concussion tests after reportedly being found wandering along the bubble’s base (top picture) several hundred metres from the crash site and talking in tongues. Blood specks were also clearly visible on his Make Australia Great Again cap.

Mr Morrison had also clearly wet his pants  but it’s not known whether that happened before or during the crash.

The PMO source said everyone was well aware that the Canberra bubble was a fixture of the national capital. 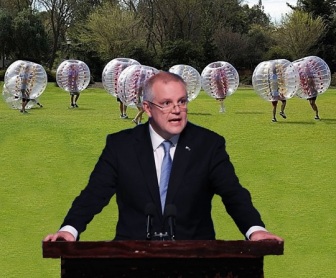 “So much so that on the occasions when the PM’s away from Canberra the Federal Parliamentary Media Gallery covering him insist on travelling with their own personal bubbles (pictured).

“But as you know the PM’s been doing a lot of travel overseas and around Australia lately and we suspect his driver may have simply forgotten where he was for a moment or two.

“While nobody misses the Canberra bubble when they are away from Canberra, it’s impossible to miss when you’re in town, which the driver proved by crashing into it,” the source said.