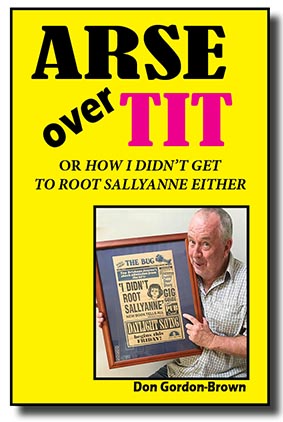 Don Gordon-Brown offers up some more reflections from his soon, probably never-to-be-released, memoir on his turbulent six years at The Courier-Mail. He’s really only writing it as his own humble way of honouring the excellent tome, Head over Heels, that Hugh Lunn wrote about his own time at the Courier.

Someone once suggested that I introduced indoor cricket to Australia.

I immediately checked my bank account and reviewed all my financial assets and decided that the claim probably wasn’t true – or that if I did, indoor cricket was simply a bad business idea.

Which is a distinct possibility given my history of running any business I have ever had any association with into the ground.

But what is true is that Australia’s first indoor cricket venue was in Brisbane, down Albion way off Crosby Road somewhere and, so that earlier suggestion goes, it was opened by someone who had taken part in our hard-fought matches played out on the long hallway at the Magistrates Court building in Stanley Street, South Brisbane in the late 1970s.

Demolished for Expo 88, the courts were in a plain two-level building that had no appealing structural features or history deserving of a plaque. More art wrecko than deco, it was a building that had the Deen Bros written all over it, not that we knew that then.

As soon as the magistrates left for lunch, those big two wooden doors – oak? – at the front of the courthouse were locked, the cricket equipment was brought out of hiding and the battles began.

It was this lunchtime hitfest/bumper barrage that made covering courts bearable. And the pattern never changed.

Whenever some Courier tyro was sent down to courts as my understudy, it was my solemn duty to teach them everything I knew about court reporting and that generally took up to late morning.

Then came that endless wait for the courts to clear of magistrates, miscreants and legal minds and for someone to call “Play!”.

It was generally journos against court officials. Two against two. Odd numbers meant someone batted twice, once for each side.

And please don’t make the mistake of thinking these matches were hit-and-giggle affairs. This was not cricket for the faint-hearted or unskilled.

Coming at you at considerable pace from probably just short of a real cricket pitch length was a rather heavy ball made up of paper rolled tight and covered in metres of sticky tape.

The pitch was a thin, worn carpet discoloured by the passage of the flotsam and jetsam of Brisbane lowlife, not to mention people facing various criminal and traffic charges.

It played straight enough once you got your eye in and the runs started to flow freely; one for hitting either wall the stumps side of the wooded seats for those awaiting execution, two if you got it past there. A straight drive past the bowler into the bowels of Court No 1 was a four.

Think it was easy then to get to the compulsory 20 retirement in your first dig? The ball was constantly being retaped so that it had the weight and dimensions of a standard cricket ball – and it could soar wickedly off a length.

The electronic keeper was not merciful; any nick behind was out unless it went down quickly. LBWs were by mutual consent. Hard to believe? It actually worked quite well. We weren’t kids refusing to give up the bat. If it felt plumb, we accepted it.

Then, again, maybe we were happy to walk off if the most feared bowler in the game was at the crease. Paul Andre LeClerq was a fairly solid giant of a man. He’d start his run-up out of sight, probably somewhere near his clerk-of-the-court’s desk in Court Number 1.

You could hear him a’huffin’ and a’puffin but wouldn’t see him until he emerged at the court’s doorway. With perfect timing, he’d dipped sideways a little to allow his bowling arm to swing through its arc and just make it under the door frame and not snap all his fingers off on the architrave.  That ball would then often whistle past your face at Michael Holding pace.

The only saving grace is that Paul LeClerq was the Tony Dell of court cricket; if you could survive his assault for a few overs, he’d tire fairly quickly and be in need of a Bex and a good lie down.

One poor bastard who faced LeClerq at his venomous best was a solicitor who for some reason had come to the courts early for the afternoon session. “Mind if I have a bat,” he asked. He took guard and faced up but quickly decided his time would be better spent studying his brief after being clean bowled by LeClerq’s first two deliveries.

I forget the poor bastard’s name but I do remember he had been an opening batsman for the Queensland Sheffield Shield side.

Day in and day out, with no chance whatsoever of rain washing out play, those lunch-time cricket contests continued at pace with no quarter asked for or given until we heard the knock on those front doors and reluctantly let in the magistrate conducting court that afternoon.