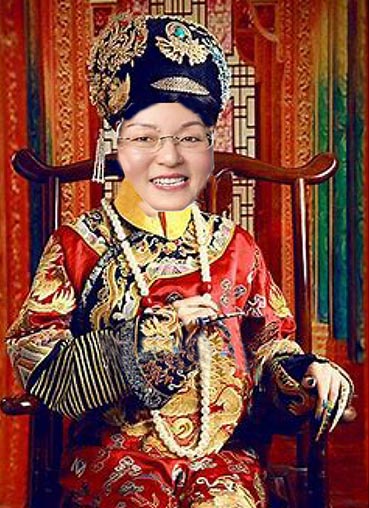 Take a chill pill, people! That’s my advice to left-leaning folk who are hoping that the current problems facing Madam Gladys Liu could see the beginning of the end of Morrison and his moronic ministry of misfits and miscreants.

True, if Comrade-ess Liu (above) is forced out of federal Parliament over claimed links to the Chinese Community Party, the Morrison government would be reduced to minority status, at least temporarily.

But here’s the grim reality check, people. The chink, if you like, that will prevent such a pleasing scenario from unfolding for decent Australians appalled by the hubris and smirkiness of the Slogan Bogun, the happy-clapping Liar from the Shire, since his “miracle” re-election.

She’s as safe as houses, the Parliament House to be precise. Ditto for any other government member in a marginal seat for the next three years.

Splash such a liu’d video around and Scott Morrison will spend next week in Parliament shouting across the chamber about the invaluable contribution the Liberal Member for Chisholm is making as his government begins the long process of economic recovery after six years of Labor debt and disaster.

Home Affairs Minister Peter Dutton will work in a fulsome few words of praise for Ms Liu as he shouts his daily stump speech about Labor’s 1200 deaths at sea and how it weakened our nation’s borders.

Sorry folks, but Gladys Liu’s woes are not the answer to our nation’s malaise under Morrison.

While I would never wish harm on anybody, I still think the best solution is for a carload of Queensland LNP lower-house members on their way to a party conference to collide head-on with a fully laden petrol tanker on a Queensland highway.

In my mind’s eye – and there’s a certain pleasure in envisioning this – I see George Christensen (Dawson) asleep at the wheel after a tiring overnight flight from his home in Manila.

Beside him is Bert van Manen, the member for Forde. Crowded in the back, their eyes just staring to pop as they become aware of what’s about to happen, are Luke Howarth (Petrie), Ken O’Dowd (Flynn) and the aforementioned Spud with Dead Eyes (Dickson).

I see – after a suitable period of mourning for some of the finest peoples’ representatives ever to have graced our national stage – a super Saturday of by-elections held in the five Queensland electorates.

And how good would it be if there was no spiteful multi-million dollar ad spend from that fat cunt, worker-hating Clive Palmer because he can’t afford to because he’s finally done the right thing and paid all his workers’ entitlements?

And how good would it be if this time around, the electors ignored all the death-tax scares and other gross lies about policies Labor never had and thought instead of how they’ve been diddled out of their promised $1200 income tax cut and $800 pensioner rebate.

And how good would it be if Bob Brown a month out from the by-elections had been trussed up and dropped somewhere deep in the wilderness of south-west Tasmania, with or without a parachute.

How good would all of that be for Australia?