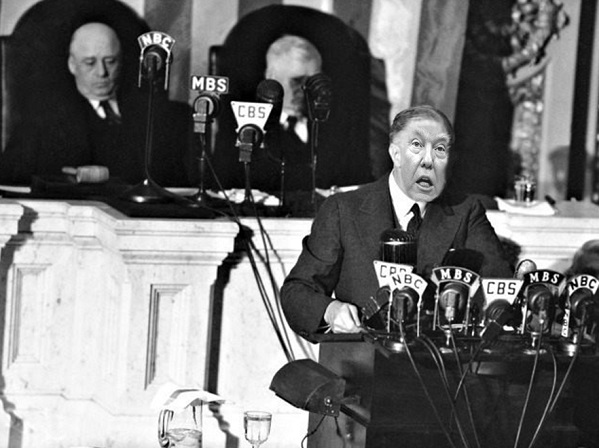 World leaders have expressed shock at the declaration of war on Great Britain by US President Donald Trump, a hostile act sparked by criticisms of him and his administration by the UK’s Ambassador to the USA, Sir Kim Darroch.

Leaders of nations around the globe have expressed fear that the action by Mr Trump could lead to World War III.

The President today appeared before the US Congress to seek approval of a declaration of war against the UK (main picture) which was approved almost unanimously.

World leaders were taken by surprise at the escalation of the President’s response from rude Twitter messages to outright war following the leaking of emails containing Sir Kim’s criticisms of him and his administration.

The President began his speech to members of the US Congress in Washington by saying July 7 this year, the date the emails sent by Sir Kim were revealed, was “ a day that would live in covfefe”.

He quickly corrected himself, by saying “a day that would live in infamy” and later blamed a problem with his tele-prompter.

Mr Trump sought from Congress an immediate declaration of war “to restore America’s pride” and after his request was approved he departed the chamber to cries of “USA, USA, USA” with many members wearing “Make America Great Again” caps and burning the UK flag.

Some Democratic Party members of congress joined in, explaining that in the face of the 2020 election no US politician could afford to be against a war that was likely to prove short and popular with voters. 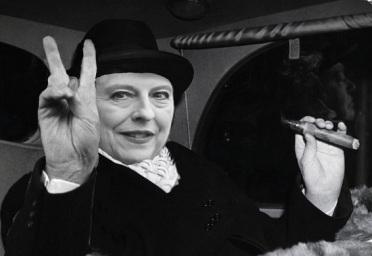 In London UK Prime Minister Theresa May (pictured) called an emergency meeting of her cabinet to discuss the defence of the nation in the face of an expected imminent US military assault.

The new war has thrown the Conservative Party leadership campaign into disarray, with Mrs May hinting that she would now stay on as PM “for the duration”.

“This is not so much the beginning of the end for Boris but the end of the beginning for me,” she growled, a stogie in her left hand and a half-empty bottle of 40-year-old single-malt Oban scotch nestled out of sight between her legs.

Leadership contest frontrunner Boris Johnson was unaware of the declaration of war on the UK when contacted by reporters at a furniture dry-cleaning firm in west London.

“Bugger! I say chaps, that’s a bit of a jolly bad news isn’t it? Rather! I do hope Theresa May can sort this beastly mess out as well as Brexit before I move in to Number 10, because I’m not really one for that sort of biffo,” he said while running a hand through his unruly hair.