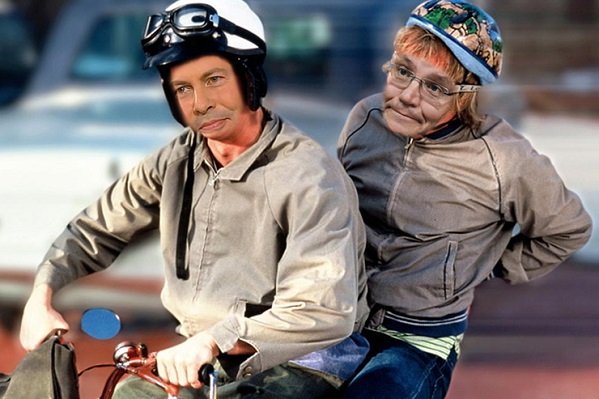 Hollywood is coming Down Under to make the much-anticipated fourth installment of the Dumb and Dumber franchise that started with the hugely popular original 1994 movie starring Jim Carrey and Jeff Daniels.

But the expected slapstick comedy, Dumb and Dumber Down Under, set to star Prime Minister Scott Morrison and Treasurer Josh Frydenberg, will include a large element of political satire too.

Speaking from her office at Quay Grip Pictures in Los Angeles, executive producer Coco Kane, told The Bug she was attracted to the project by the absurdity of its screenplay.

“I’m sure that the latest film will see fans pack theatres once again, even though we couldn’t secure the services of Jim and Jeff,” she said.

“But ever since they finished Dumb and Dumber To, released in 2014 to mark the 20th anniversary of the original, we’ve had a team of writers working on a new film for its 25th anniversary.

“We think there’s a lot of life left in the franchise and because Jim and Jeff didn’t feature in Dumb and Dumber: When Harry Met Lloyd in 2003 which still did good business, we think having other actors take the lead roles won’t be a problem.”

Ms Kane said  the team of script writers searched the world for a story that was funny enough to fit the Dumb and Dumber mould.

“We found it in Australia and we think it will have the whole world laughing when it hits the big screen,” she said.

“Audiences elsewhere may find it hard to believe, but at your recent federal election you had a government that by all objective measures was totally fucked. It had been in office since 2013, was split within itself, riddled with faction-fighting, and had dumped two prime ministers.

“It was exhausted, unpopular, and out of ideas if it ever had any. Yet it gets re-elected, albeit only just, and the supposedly wildly popular opposition gets shafted. 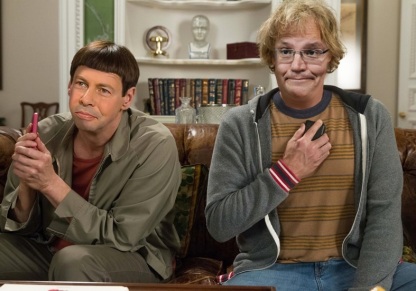 “The script is all written around the two guys at the head of this shambles of a government, Scott Morrison and Josh Frydenberg, both of whom we signed up and who have already shot some scenes in Canberra at The Lodge (pictured).

“The comedy comes from them both keeping straight faces while they repeatedly tell anyone who’ll listen that they are great economic managers while behind the scenes the reality is utter chaos.

“The movie has these two guys running a national economy telling voters what a fantastic job their party has been doing since 2013 yet the economy has actually tanked.

“Nobody is using the ‘R’ word yet, and there’s plenty of jokes around that, but growth is low, wages’ growth is just about zero, and they’ve stood by while paypackets are cut through the abolition of penalty rates. It’s just too funny for words.

“The retail sector is comatose, the rural sector is screwed by droughts or floods or cyclones, manufacturing has gone downhill, and they even dared the local car industry to shut down which it did. Hilarious.

“For average Aussies, house prices are through the roof, personal debt is sky high, the cost of living is going up and up and up, aged care is so bad there’s a Royal Commission examining it, the NDIS seems to be doing more harm than good, the banks are bastards yet the two central characters do everything they can to hide that fact, and public hospitals and state schools are screaming out for funding and resources. This stuff just writes itself.

“On top of all that, when you consider the future challenges facing the nation, they’ve still got no coherent energy policy, they basically don’t think climate change is real, and there’s no plan to transition the economy from fossil fuels to clean or renewable energies.

“I mean, if all this wasn’t reported in all the Aussie and international media, you’d think we’d made it up.”

When The Bug asked Ms Kane if she could identify who was “Dumb” and who was “Dumber” between Mr Morrison and Mr Frydenberg, she responded: “Oh, I’m sorry. You don’t seem to understand the premise.

“The ‘Dumb’ in the title refers to the government, the ‘Dumber’ are the voters,” she explained.