The first phase of the campaign to rebuild his image and public and party room support is his decision to appear with his new partner Vikki Campion on the Ten Network’s popular Dancing With The Stars program (main picture).

When approached for comment Mr Joyce verbally attacked reporters saying the media were infringing on his and his families’ privacy especially as they were not offering any cash for his comments.

But a Canberra insider said the decision to join the cast of the popular TV show proved Joyce had not lost his touch when it came to political campaigning.

“Barnaby thinks if he can show a different side to himself then the public and more importantly his fellow National Party MPs will support him in his bid to become leader again,” one Canberra insider said.

“His plan will work only if he doesn’t put a foot wrong, and on a dancing show that’s a big ask given his propensity to step in piles of steaming shit at the drop of an Akubra.”

White House spokesperson Sarah Huckabee Sanders is leaving her job because of the physical toll it has taken on her in just over three years.

“Although no specific reason has been given for her announced departure, anyone who has worked with her has seen for themselves the tremendous physical impact the 24/7 job has had on Sarah,” a White House insider said.

“Her appearance has changed dramatically from the time before she worked for President Trump (right above) to the day she announced she was leaving (right below).

“That job’s a real challenge and anyone who’s done it will know how tough it is and how it changes you physically, and they will know exactly what’s behind Sarah’s decision,” the insider said.

One of the UK Conservative Party MPs seeking to be Britain’s next prime minister denies he has radically changed his image just to secure votes.

Environment secretary Michael Gove is one of only five MPs left in the race to succeed Theresa May and will face further run-off ballots of Tory MPs until only two names are put to the party’s rank-and-file for the final choice. 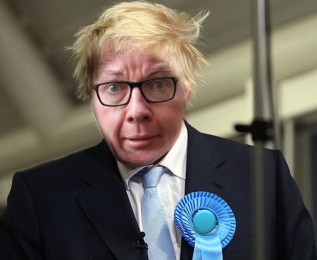 Mr Gove (pictured) rejected suggestions he was adjusting his image and personal style just to attract the votes of fellow MPs and party members.

Speaking while rescue workers attempted to free him from a flying fox harness stuck on a zipline in London’s Hyde Park, Mr Gove said “with me, what you see is what you get”.

“I’ve not changed at all,” he said while scratching his now bright but unkempt blond locks.

Mr Gove also denied he had hired a PR firm to make sure Tory MPs and party branch members were aware he now had a girlfriend, had been unfaithful to his wife many times, regularly “put his foot in his mouth”, had a low concentration span that made attention to policy detail impossible and rode a bike to work.