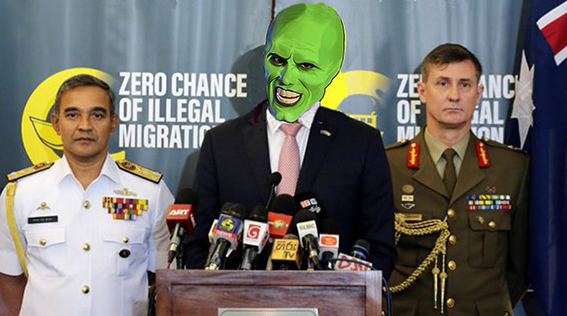 Many ministers in the recently returned Morrison government are displaying classic symptoms of The Mask Syndrome, a psychological defence mechanism used by politicians worldwide whenever they are re-elected against all logic and public – and indeed their own – expectations.

That’s the opinion of Professor Iva Skreuloose-Mahself of the school of  forensic political psychiatry at the University of NSW.

“Basically these ministers are embarrassed to find themselves back in government especially when they know they’ve done a completely shitty job and totally deserved to be sacked by the electorate on 18 May,” Prof Skreuwloose-Mahself said.

A classic case in point was the media conference on Monday by returned Home Affairs Minister Peter Dutton (pictured at top) flanked by defence force chiefs.

“The ‘mask’ that we see here is Peter’s way of hiding from the public his deep shame about the farrago of lies his campaign pedalled to get him reelected, and the absolute disgust he now feels for himself for still being the minister,” Prof Skreuloose-Mahaelf said.

“Like the rest of the ministry, Peter knows he totally deserved to be shunted to the opposition benches at the recent federal poll for at least one term and most likely much longer than that.

“Sure, we saw the initial bravado at the joint party room back in Canberra where Prime Minister Morrison and his ministers high-fived each other, appeared jubilant and said things like ‘how good is Australia!’

“But that’s also the typical precursor to Mask Syndrome, which has since taken hold in typical fashion among most if not all of the ministry.

“These pollies are basically now bringing down the shutters so that the general public can’t see the shame they all feel about how they’ve somehow conned the voting public into giving them another totally undeserved term.

“I find Peter’s case of particular interest because while deep down he’s apparently a really nice, decent and caring human being, his last two ministries – Immigration and Home Affairs – have called on him to appear cold and heartless.

“He has basically trained himself to come across like a sociopathic potato with dead eyes. A man without feelings and totally devoid of compassion. He hates doing that but he knows it’s needed to keep Australians safe and our national borders secure.

“To continue to do his ministerial duties to the best of his abilities after the Morrison government’s shock, unexpected and undeserved win, he simply cannot afford the public to see the real Peter Dutton, the one now totally embarrassed, even humiliated, by recent events and ashamed to his very core about where he now finds himself.

“The eyes really are the windows to the soul. Peter had worked hard and for so long to ensure people only saw in his eyes an almost inhuman indifference to the suffering of others. A contempt for one and all, really. Almost a visceral hatred for the world around him and for those below his station in life, which was basically everybody.

“Now those same eyes – if we ever got to see them – would reveal to the world the naked truths that lie beyond them: the deep shame, the apologetic persona and the constant pitiful self-loathing.