Plans for an Australian version of hit UK panel show Would I Lie to You? have been axed following the Morrison’s government’s shock re-election in mid May.

The Bug understands those plans were well developed within the Australian Broadcasting Corporation, with a pilot show taped in its Melbourne studios in the final week of the federal election campaign when the government looked certain to the booted to the opposition benches.

The local version was to have a distinctly political flavour and the man who thought up the concept, veteran ABC political scribe Barrie Cassidy (pictured) who leaves Insiders next Sunday was to have helmed the weekly program, taking the role played by Rob Brydon since 2007 in the much-loved British show. 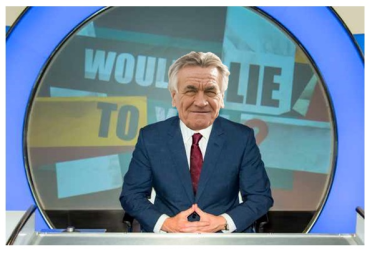 A senior ABC executive involved in the project said on condition of anonymity: “Australia just doesn’t have anywhere near enough talented or funny people across the media and entertainment sectors to sustain a WILTY show similar to the UK one.

“Could you imagine how long a local WILTY would have lasted with the current batch of Australian stand-ups or TV network ‘celebrities’?

“So many Britons are just naturally funny. They don’t have to put on a silly voice or wear a hat or dress in outrageous clothes.

“So Barrie’s idea of it having a political bent was quite sensible really.”

The two team captains were to have been an impish Christopher Pyne, taking the toff-like David Mitchell role, and Scott Morrison as the sort of boofhead everyman played in the UK version by Lee Mack. How good would that have been?

Of course, Morrison was expected to stand down as Liberal leader after the election, move to the backbench and only undertake his pastoral duties in his electorate of Cook, resigning to concentrate on a show business career if WILTY took off locally.

And the pilot seen by The Bug suggests the local show would have been a ratings winner, with Cassidy effortlessly hosting the show and engaging in very funny banter with his panel although his attempts at impersonating Michael Caine and doing “a man trapped in a box” fell flat.

Pyne, now retired from politics, was available for the pilot which shows him having a lot of fun when it’s his turn to talk about his mystery “possession” which turns out to be a model of a French-made submarine and he has to state how much of each sub would be built in South Australia and how many local shipbuilding jobs each sub would create.

With Prime Minister Morrison tied up on the hustings, his role in the pilot episode was played by radio man John Faine who was walking past the studio at the time and the pretend panel had to question him on his claim: “I once went down on my knees and cried uncontrollably over refugees rotting away on Manus Island and in PNG.”

Barrie Cassidy told The Bug on condition that we spelt his first name properly: “The show’s axing was a real shame but I agree with the ABC management that you really couldn’t have a political Would I Lie To You? format without Scott in a major role.

“And we had so many panellists lined up: Peter Beattie and Campbell Newman from Queensland, Michaelia Cash, Michael Evans and Mark ‘This is Mohammed. He was my taxi driver and I once broke his arm’ Latham and any number of just returned LNP politicians from Victoria. The new Liberal MHR for Chisholm Gladys Liu was to be on the premiere and state: ‘I had nothing to do with the thrust of LNP advertising and polling booth signage’.

“They all worked well with the format, except for Peter Beattie. Unfortunately every time it was his turn the opposing team immediately and without even hearing him out correctly picked him as lying which made that particular pilot episode run about 12 minutes short.

“Apart from that glitch I can’t lie to you. It was going to be a monster hit!”