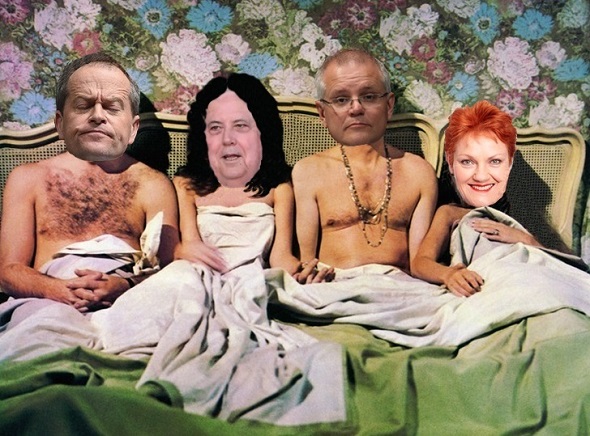 This time last year my boyfriend and I set 18 May as our wedding day. We went ahead with the ceremony despite it also being the day of the federal election.

Both my boyfriend and I were virgins when we wed, having agreed we would “save” ourselves for each other during our eight-year engagement.

So as you can imagine we were both very  excited when we finally closed our honeymoon hotel door behind us.

But what a disappointment the night turned out to be. My brand new husband just couldn’t perform after his penis didn’t meet my or his expectations. It certainly wasn’t the size we had both expected.

I was left to go to bed and fall asleep greatly frustrated. What do you think went wrong?

Doctor Dick replies: It sounds very much like your boyfriend was struck by a sudden and unexpected shortening of his penis.

The Poles only recently discovered this condition and are trying to work out how it can be better predicted.

On a recent Saturday when I was out and about all my friends told me that if I hooked up with this particular guy he’d give me a night of indescribable pleasure.

He told me himself that if we got together all my dreams would come true.  But nothing of the kind happened. In fact he fell flat, quite literally.

It was very disappointing. What do you think went wrong?

Doctor Dick replies: Hmmm, it seems like he’s a victim of premature declaration.

I was at a nightclub last Saturday with my best friend and she started a conversation with two guys from out of town and suggested we all try same-room sex.

She had to explain to me it meant that two couples get it on separately but in the same room and was an activity engaged in mainly by swingers.

I thought I’d try it out so we went back to the hotel room of one of the guys and we all started to fool around.

Even though I actually preferred the guy called Scott, I ended up with the other guy called Bill on the sofa while my friend and Scott were in his bed.

As soon as we all started going at it I couldn’t help but hear how verbal Scott was with my friend and how physical he was as well.

He always seemed to be on the move and even gave the impression he was almost hyperactive.

Oddly, he also kept a baseball cap on even as he was having sex.

Bill, on the other hand, was nowhere near as active. In fact all he did was this strange sort of running or jogging movements that didn’t turn me on at all. Plus when Bill whispered in my ear he didn’t sound at all genuine. He sounded fake and over-rehearsed.

Do you think I did the right thing?

Doctor Dick replies: As always with swingers your first preferences are really all that matters.

Doctor Dick replies: You’re not an ex-Ansett flight attendant by any chance?

That’s amazing. How on earth did you know that?

Doctor Dick relies: It’s a gift. But it’s also my job. I’ve been doing this a long time and I am, after all, a highly trained professional. Anyway, please … start again.

I hooked up with this guy called Scott on the dance floor and I pretty much told him to relax because he was on a sure thing. He cottoned on straight away, leant in and whispered in my ear that he could do amazing things with his tongue!

Back at my flat, I stripped off my kit and popped straight into bed. And that’s when it all went pear-shaped. Scott just stood at the end of the bed, closed his eyes, raised one hand with his palm outstretched towards the ceiling and starting talking a whole heap of mumbo jumbo.

It was sort of like a chant but I remember bits of it.

I thought to myself: “Fuck me. All I wanted was a no-strings-attached root.”.

He eventually came to bed but the sex was very, very average, I can tell you. He made a lot of promises as he disrobed but kept none of them. He was a real “wham bam, thank you mam” sort of guy. “How good was that!” was the first thing he said after we’d done the business, short as it was in more ways then one. And I couldn’t have agreed more when he added: “I’ve had a go but now I’ve got to go.”

Why do I always meet such jerks? Do I need to change my ways or save time and just be celibate for the rest of my life?

Doctor Dick replies: It sounds like you’ve copped a liberal dose from a single-minded prick on a selfish, self-centred mission even more driven than your own. And the lies men tell to get their way, eh? At least you can put the whole dreadful experience behind you. Imagine if some sort of commitment arose out of that sex encounter and you had to put up with him for, say, three long and miserable years?

I finally went to bed the other night with a work colleague who’s been flirting with me for yonks but when I saw him naked just as we were about to get down and ugly, I looked him up and down and said: “Bloody hell, who do you think you’re going to please with that?!”

He stormed out and now we’re not even on talking terms at work. Did I say the wrong thing? Isn’t honesty the best policy in all relationships?

Doctor Dick relies: Small talk isn’t really your strong suit, is it? Sometimes you’ve got to have the guts not to say what you’re thinking.